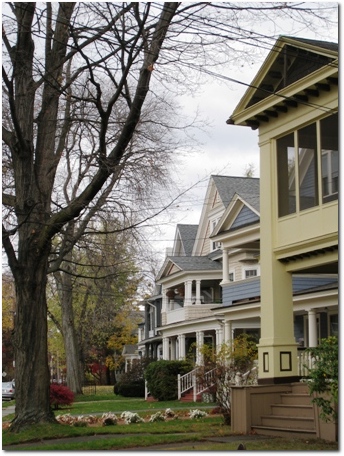 On Thursday, October 29th, the West End Civic Association (WECA) Planning & Zoning Committee met to begin a conversation about many of the zoning-related issues that the neighborhood found contentious during the past year. The agenda listed density as the main topic, with specific mention of converting existing properties to include more approved units, new condo and multi-unit developments, fairness issues around illegal rentals, accessory dwelling units, the financial impact of zoning decisions on homeowners, and finally the fairness of zoning decisions on homeowners.

John Gale, committee chairman, kicked off the meeting with a brief history of zoning in Hartford and the current zoning in the neighborhood. Most of the area north of Farmington Avenue is zoned for single family, though there are a few blocks that allow more density. South of Farmington Avenue is zoned for higher density residential buildings. From there he transitioned to a quick survey of recent WECA Planning & Zoning Committee topics and positions. The stated goal of the meeting was to start a conversation, and to begin the process of working towards a WECA policy on common zoning issues in the neighborhood.

A Wide Open Discussion, Or Not
Once the floor was opened to the attendees, the discussion quickly narrowed to â€œproblem properties,â€ which were all multi-family homes. The group seemed most concerned about nuisance issues (noise, traffic, parking, …), and discussed the appropriateness of using zoning laws as a primary strategy for fighting back. Although the zoning laws are clear about what is allowed, they are implemented inconsistently. Ambiguities seem to arise from bureaucratic issues like the Assessor and Zoning departments classifying properties differently, and the policy of zoning enforcement on an â€œas neededâ€ basis. As a result, owners currently have the flexibility to use their properties in ways that conflict with zoning laws as long as they do not upset their neighbors and get reported to the city.

Overall, the group seemed to like that the zoning laws were inconsistent. Multiple attendees noted that the nuisance neighbors were more often than not living in multifamily properties owned by absentee landlords and configured in ways that conflicted with zoning. Others spoke about the limited success that they have had in working with the police department to address â€œquality of lifeâ€ issues. Reporting the properties for zoning violations was an effective way to get the attention of the owners, and ultimately address problems caused by the residents.

A minority of the group spoke out against the zoning ambiguity, primarily on the grounds that it was bad business. One attendee described the ordeal he has been through after purchasing a multifamily property. His good-faith efforts to bring it into zoning compliance and improve the property have been halted by confusion within the city about what is allowed. The property in question is categorized differently by the Assessor and Zoning departments, and research by his attorney has uncovered evidence that a third use may predate the cityâ€™s 1968 implementation of zoning laws. Other attendees also described their challenging experiences in securing permits.

As a real estate agent trying to sell homes in the West End, it is very important to accurately describe, and advertise, a property so that potential buyers and other real estate agents know exactly what uses are permitted. This is obviously a challenge if the official policy is that many current uses are technically illegal, though allowed through non-enforcement.

But What About Density?
The question of density was not truly the focus of the meeting, though it surfaced periodically and again divided the group. Those supporting increased density generally advocated recognizing existing 3-families and allowing both 3rd-floor rentals and accessory dwelling units. They argued that density is good for local businesses, property values, expanding public transit, and energy efficiency. Those opposed to increased density focused on the traffic and parking issues that already exist in some areas of the neighborhood. The majority seemed to support increased density in theory, though the link to absentee landlords and nuisance neighbors seemed to make many feel it would not be right in practice.

Larger questions about density went unaddressed because no one raised them as issues. The Committee has held meetings to discuss proposals for a vacant lot on Kenyon, the former Medical Society building on Scarborough, and the University of Hartford Asylum campus. Each meeting drew numerous West Enders with a direct interest. And each meeting ended with the neighbors in attendance against aspects of, or all of, the proposed project.

An Important Conversation
Working together as a neighborhood to find agreement on zoning and development issues is challenging, but important, work. Previous meetings have demonstrated that there is not a single consensus among all interested parties. Taking the time to find common ground will allow WECAâ€™s representatives to head off unacceptable projects on the neighborhood’s behalf, which will hopefully reduce the number of emergency zoning meetings. Perhaps the conversation will also help identify uses to encourage for specific properties.

This meeting was the first to allow a forum for the West End to be proactive in addressing a subject about which many have very strong feelings. We encourage everyone to get involved in the discussion by participating in the next meeting and raising issues that are important to them. Ideally, the effort will be able to identify policies that represent the neighborhoodâ€™s collective opinion so that owners and potential owners know what to expect when looking to change the use of their property.