The West End of Hartford has been debating Accessory Dwelling Units (ADUs) over the past few years. A proposal is currently on the table to change the zoning laws to allow property owners to add an apartment over the garage space in their historic carriage houses. 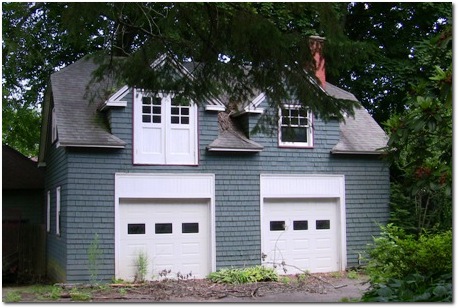 There is no consensus among residents as to whether the change would be good for the neighborhood. Votes taken at various meetings have ranged from enthusiastic support, to vigorous opposition.

Supporters of Carriage House ADUs have been very successful at advancing the idea. They persuaded the West End Civic Association (WECA) to add it to the neighborhood’s list of goals for the recent One City One Plan effort. The proposal has also made it to the City of Hartford Planning and Zoning Committee.

The core argument for changing zoning to allow ADUs in Carriage Houses is that it will increase property values. Increased property values will, supporters assert, lead to more important benefits like a way for homeowners to preserve historic structures, additional (and interesting) housing opportunities, and increased tax revenue for the City.

On the other side of the issue, the argument against the proposal is the new apartments will be a nuisance to the neighborhood. Those opposed to Carriage House ADUs talk about the noise and overall impact of additional people, including their additional cars, on the direct neighbors and tie it to the overall quality of life in the neighborhood. They argued that even if it did increase property values for the owner, it would hurt the values of nearby homes.

The Most Recent Debate

Attendees at a recent WECA Planning and Zoning committee meeting discussed Carriage House ADUs for about 2 hours, and seemed sharply divided into those supporting and those opposing the proposal. Opponents seems to all be pushing in the same direction, using the nuisance argument.

Individual supporters, on the other hand, seem motivated by a more diverse set of arguments. The author of the proposal focused on the economic benefits to homeowners, and specifically how it would allow owners to preserve and restore historic buildings. Another attendee supported the initiative because they felt that increasing residential density was the ultimate goal – that the West End is special because it is an incredibly diverse mix of all types of people. Adding smaller, more affordable, housing options would preserve that diversity.

A Preview for Future Debates

ADUs in Carriage Houses are a preview for a (likely) larger issue that is waiting in the wings. What should the neighborhood do about the practice of having unrelated students/boarders live on the third floor of single-family homes? Housing UConn Law students, UHart students, or others in search of a smaller apartment in a neighborhood setting is a long-standing tradition in the West End, it meets a need for both the tenant/roommate and the owner.

Our current policy of self-governing has been mostly successful. There are periodic issues with the lack of formal rules when owners abuse the system. However, because the rules on the book make most of these situations technically illegal, the neighborhood has viable options. If the owner is unwilling to resolve the situation on their own, the community is able to report the issue to the City and have the authorities resolve the problem.

The primary risk to the status quo arises from the fact that these rentals are part of the informal economy. Owners are (likely) not pulling permits for renovations, or providing the proper number of access points, leading to safety issues. As real estate agents, selling a home with a 3rd floor apartment requires walking a fine line.

Bringing current practices out into the open would address the safety concerns, would clarify what is allowed and what isn’t, and would ensure everyone is treated fairly and equally (no more tattling to the City if someone gets upset with their neighbor).

On the other hand, it would require the neighborhood to have an extensive debate about what it wants to be as it enters its second century. Do we want to encourage density and diversity by allowing small apartments to be tucked into larger single-family homes? Do we want to preserve the single-family character of the majority of the West End by enforcing the existing zoning laws? Is there some middle ground that could be a compromise? Perhaps the decision could be made on a block-by-block basis rather than for the neighborhood as a whole.

Taking a step back, it seems like the fundamental question is this, “Is residential density good or bad for a neighborhood?” Readers, what do you think?

5 thoughts on “Carriage Houses in the West End”