The Hartford County Condo market has fallen out of sync with the traditional seasonality, creating a good opportunity for buyers with lots to choose from and a more favorable pricing environment to go along with very attractive mortgage rates. 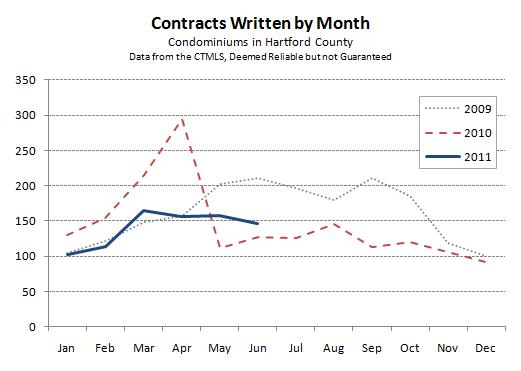 The data shows a 13% decrease in the total number of contracts from the second quarter of 2010. However, looking more closely at the individual months, we can see that 2011 showed very steady performance – about 150 deals came together in each of the three months. The comparison to 2010 is tricky because of the federal home buyer tax credit. Last year there was a huge surge of activity in April 2010 followed by two much quieter months to round out the quarter. 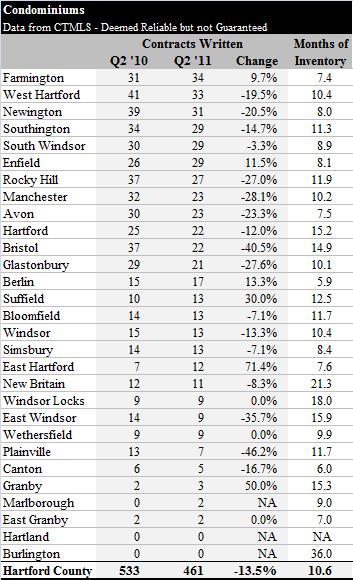 More concerning is the lack of a meaningful bump in overall activity during the spring 2011 months. The 2009 market showed more traditional seasonality, which gives a sense that 2011 spent the second quarter of the year headed in the wrong direction.

Looking at the numbers for the individual towns, sorted by total Q2 2011 contracts, we can see that performance is all over the map. Some of the towns near the top of the list (towns with more condos in their housing stock) performed pretty well – Farmington and Enfield were more active than last year, while South Windsor was basically flat. Other towns with lots of condo communities struggled to match last year’s totals, showing declines of up to 40% in the number of contracts.

Inventory levels continue to increase, which is another important indicator of the direction of the market. As of this past weekend, it would take more than 10 months to work through the inventory currently on the market.

All of the data clearly points to an opportunity for buyers. The elevated inventory means that there are lots of properties to tour, and to choose from. The lack of a real increase in contract activity through the spring months shows that, for whatever reason, condos just aren’t as popular these days. Mortgage rates continue to be quite attractive, and loans are available for those with good credit and reasonable debt loads.

Renting? It may make sense to run the numbers to see if this is the right opportunity to become a homeowner.

Curious about investment properties? Being a landlord for a condo is a little bit easier than managing a multi-family or other type of property. It’s still a big commitment, but there are fewer things you’re directly responsible for as the landlord of a condo.

We would be happy to talk about any situation, and have personal experience going through both of these scenarios ourselves, in addition to helping others understand and work through them.