The storm has passed, the skies have cleared, and the wind has died down. It is a bright and sunny Monday.

Sunday morning – before the eye of the storm arrived – turned out to be the worst of the weather for Greater Hartford. That’s when the bulk of the rain came through, and the strongest wind gusts, though they did not approach hurricane strengths. The rain died out quickly as the storm moved north of us, and the heavy winds that were forecast never materialized. 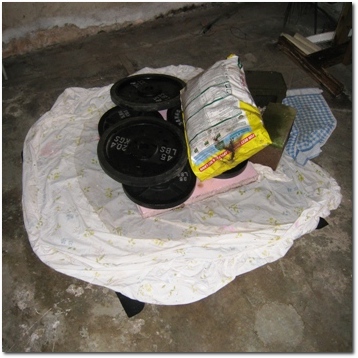 Our biggest concern before the storm was that massive trees would not be able to withstand the heavy winds, especially with the saturated soil. We were worried about cars and homes getting hit, and were mentally prepared for a power outage. Thankfully, neither happened for us (though we know others in the immediate vicinity that were affected).

Our biggest actual issue during the storm was the heavy rain. Like most homes in the area, our basement has a portion of the foundation floor cut out at the low point to allow water to drain from inside to outside. During especially rainy stretches we sometimes see water collect in the pit, and attribute it to the rising water table. Early Sunday morning we began to see signs that the water may try to use the hole to come into the basement.

Our makeshift solution is shown in the picture – we basically tried to plug the hole using whatever we could find. The key components ended up being over sized garbage bags as a liner, wet kitty litter to mold the the bags to the irregular shape of the hole, a sheet of foam insulation to hold down the perimeter, and then lots of weights to apply pressure and seal the edges. It’s an ugly solution, but we didn’t get any water in the basement.

We feel very fortunate that we seem to have emerged unscathed, and are also grateful that the scope of the damage in the region was much less than expected. Other areas of Connecticut experienced considerably more problems – flooding, trees down, and power outages. Some friends in NYC were evacuated from their high rise apartment and then came back to water damage. Friends further south have also reported major problems.

Worst of all, it seems like just about all of southern Vermont, our home state, was devastated by flash flooding. All the major routes we would take to get from Hartford to Rutland are washed out – Route 103 in Chester and Ludlow (near Okemo). Route 9 in Wilmington (near Mt. Snow). Route 4 in Woodstock and Mendon (near Killington). Other towns sustained major damage away from the primary roads, especially Brattleboro. It’s the worst flooding pictures and video I have ever seen. Please consider taking a trip up to VT this fall or winter for some touristing activities – it’s a wonderful place to explore and their economy is going to need our help.