Hartford County real estate markets finished May with basically the same number of single-family deals as March and April. Looking at the chart below, one might think that the market has hit some sort of speed limit or something. Why haven’t we broken through the ceiling of about 750 deals per month? The only month on the chart with a higher total was April 2010, which was the deadline for collecting the Federal Home Buyer Tax Credit. 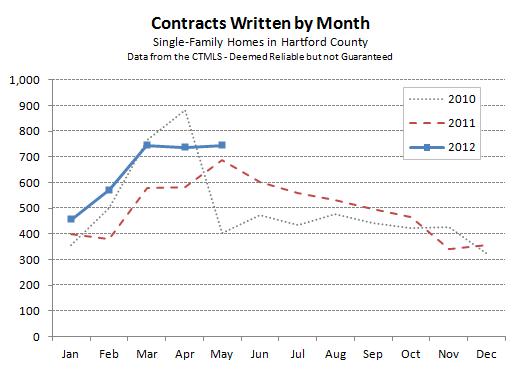 We have no changes to report on the major themes from the spring. Mortgage rates are low, and buyers strongly prefer fully-updated move-in ready homes to fixers and other projects. Hopefully sellers are making a note of this and are taking a little time to at least clean their home up before it goes on the market.

West Hartford was the big winner in May with 106 deals coming together, which was a 25% increase over the 85 from last May. The next closest town was East Hartford with 50 deals, so there was a huge difference between West Hartford and everyone else.

Other towns on the chart below jump out because of how much more active May was this year compared to last year. Suffield increased from 7 deals to 23 for the single largest increase, but after looking at their trends in more detail it’s clear that the 7 deals in May 2011 was just abnormally low. Year-to-date Suffield is only 37% ahead of last year, though that is still trending ahead of Hartford County overall, which finished May 24% ahead of 2011.

Contrast that to Marlborough, Berlin and Granby, which are showing year-to-date increases of 85%, 76% and 74% respectively. Those three towns are smaller real estate markets, so it’s easier to see large swings, but the difference between last year and this year is striking. At the extreme end of this trend is Hartland, with 233% more deals than had come together by this time last year. Of course last year they were at 3 and this year the total is 10. 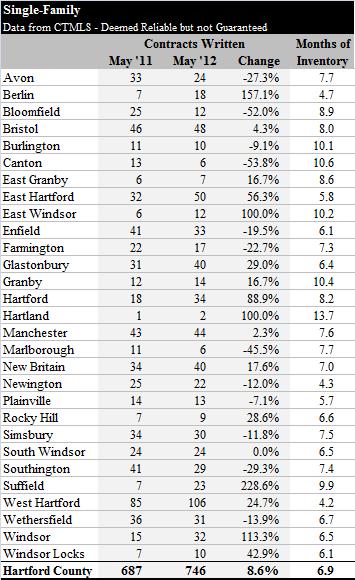