January contracts were up nearly 19% over the same month last year. The market appears poised for a strong spring season, and to extend the increase in activity that we saw in 2012. 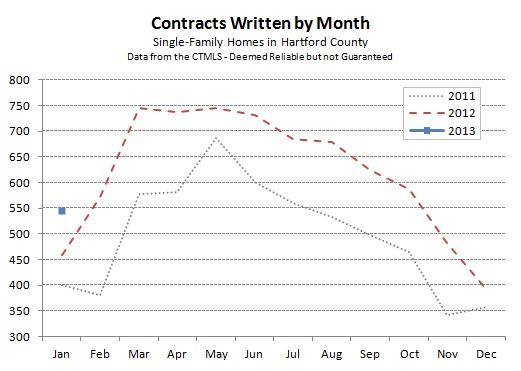 Can 2013 outperform 2012 in each and every month in the same way that 2012 outperformed 2011? That would be exciting for the market, and going back to a chart from January showing that the region is about 30% below market activity during the peak, one can imagine deal volume continuing to grow. 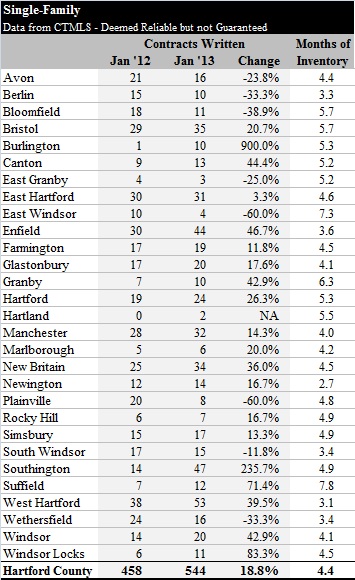 From the day-to-day perspective we can also imagine the activity increasing. Our impression during the month was that there were more buyers anxious for a new home than there were properties for them to buy. The stats are surprising since our perception was that we were constrained by a lack of available homes. Looking back, it’s clear that the excess demand we felt was over and above the 18.8% increase in contracts.

Both of us had buyer clients lose homes in bidding wars in January. We experienced the biggest mismatch between supply and demand in West Hartford, which had nearly 40% more deals than last January. A few of the multiple offer situations ended with 5 (or more) buyers all vying for the same property. It was, and continues to be, a very competitive environment among buyers.

Inventory levels remained flat at 4.4 months for the County, and much lower in certain towns. Newington and West Hartford always seem to have the fewest options for buyers, and they do lead the pack again, but there are a number of towns close behind with less than four months of inventory.

This is a great environment for sellers in the active towns, and we would encourage homeowners who are thinking about moving to reach out to their preferred real estate agent to understand their situation in more detail.