Today is the fourth day that the City of Hartford has cancelled school due to the recent blizzard. As the cleanup has progressed (or not, depending on your point of view), there has been discussion about how the whole thing has been handled. I am not privy to inside information, or a big picture view of the entire operation. But I am a City resident, have a child in the school system, and live within sight of a City public school. Here are some of my observations. 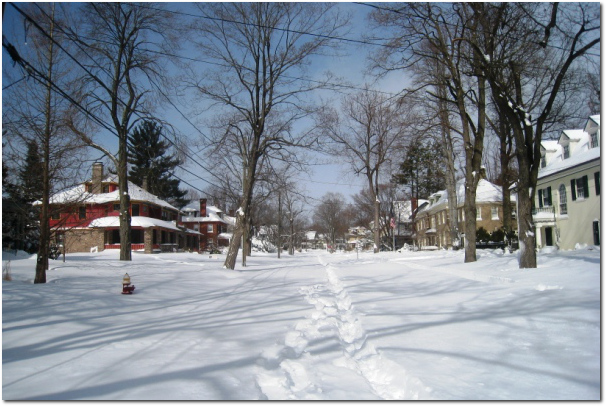 There was a solid 2 feet of snow at my house – that’s a lot of snow. One of the fun mental activities I did while spending hours shoveling the sidewalk of my corner lot was to estimate how high the pile between the sidewalk and the curb would be if all the snow were removed from the street. My best guesstimate was that the pile would need to be between 8 and 10 feet (* See bottom for more details on the estimate). I don’t think it is possible for a typical City plow to actually clear the street.

I live across the street from a member of the City public works department. She reported to work on Friday morning as the storm was just beginning. I spoke with her husband on Sunday and he said that she was hoping to be able to come home for three hours that afternoon/evening. I’m not sure if she actually made it home or not, but that would have been her first time home in 3 days. It’s Tuesday evening as I write, and tonight is the first time that I have even seen the car she usually drives since the storm began. The City seems to have taken the storm seriously.

Hartford has a number of conflicting priorities when it comes to allocating their snow clearing resources. I can’t imagine any debate about the top priority – making sure emergency vehicles can get anywhere in the City. But what comes next? Clean out Downtown so that a major hub in the regional business community can return to normal? Focus on getting the main roads back to their full width? Clear neighborhood streets for residential parking? Digging out the schools? Ideally it would all be done at once. And it seems like it usually can be done simultaneously during a normal snow storm. Hopefully one of the outcomes of this experience will be a solid understanding of how the standard procedures need to change for future large storms.

All things being equal, I would prefer my daughter to be in school than to be at home. However, given the magnitude of the storm, I understand why it is taking so long to make the City operational. What I have trouble understanding are comments that seem geared towards getting people riled up. Let’s finish the clean-up first, and then we can debate whether Hartford residents and businesses are getting the service they deserve.

* Snow Depth Guesstimate
Suppose the road is 30 feet wide, which would be two lanes for driving that are 8 feet wide and two shoulders for parking that are 7 feet wide. I’ve never measured the road in front of our place, but I know that drivers get nervous if two cars have to pass each other when cars are parked on both sides. There is about 3 feet of grass between the sidewalk and the curb at my house. So if half of the snow from the road were plowed over to my side (with the other half going to the other side of the street), then I would get 15 feet wide by 2 feet deep worth of snow. Spreading this over the available 3 feet between the sidewalk and curb would result in an additional 10 feet of snow on top of the 2 feet that already fell – so 12 feet total. Fortunately, making big piles of snow causes it to compact, so it would probably compress by a factor of 2, leaving me with a 6 foot snow bank. Unfortunately, snow can’t be plowed into a perfect rectangle that is 6 feet tall and 3 feet wide. It forms peaks that would require a higher peak and wider base. Rather than transitioning into triangle math, let’s just guesstimate the piles would be somewhere between 8 feet and 10 feet tall.

6 thoughts on “On the Fourth Day of Cancelled School”