There has a been a noticeable increase in the discussion of new construction in Downtown Hartford over the past couple weeks. It started with the revelation that UConn would consider building a facility, and continued with word that the City of Hartford was thinking about building a new City Hall to consolidate office space.

Ken Gosselin has worked feverishly to ferret out as many of the thirteen of the proposals submitted to UConn as he can confirm (Travelers Education Building, One Talcott Plaza, Downtown North, Hartford Times Building, Broadcast House site). And Dennis House got the scoop from Mayor Segarra about the City’s thinking. 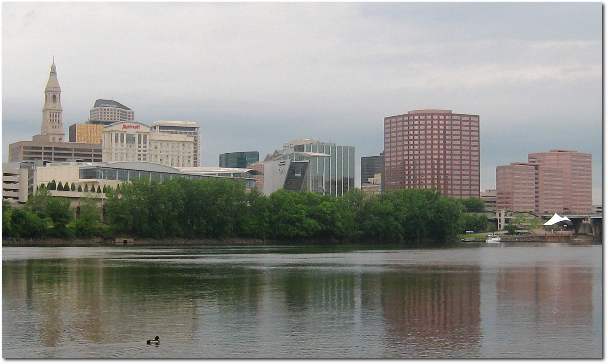 All the talk is exciting. Putting up new buildings is sexy. But we need to be smart about it since there are not only a lot of empty lots available for construction, but also numerous existing structures that could be redeveloped. The discussion gives us an opportunity to share some of our thoughts about Downtown development.

Office space attracts commuters, like it or not, so it makes sense to position those properties along the highway. Since we need those commuters to come into the City, let’s have them get off the interstate and quickly find their parking spot (ideally in an underground garage). This should not only make the commuters happier, but should also reduce the traffic burden on the City streets to the benefit of pedestrians and residents.

Bushnell Park is a terrific public space and makes a wonderful front yard for all of Downtown’s residents. Interestingly, many of the neighborhood’s residential buildings are within a block or two of the park already. If we continue to add residents, we’ll reach the critical mass needed to support the retail stores that just can’t make it right now.

Build retail between the office and residential.

Putting the retail between the office and residential buildings allows those entrepreneurs to tap into both the 9-to-5 office worker market and the nights-and-weekends residential consumers.

This is overly simplistic, of course. Retail is generally ground floor space in both office and residential buildings, so all three are mixed together to some degree. And having a good mix of office and residential helps keep the activity level of a block or street consistent 24-7 (versus “ghost town” after/during business hours).

So what about these two specific projects?

I like the idea of UConn in the Hartford Times building as the final piece of the Front Street development. The positives of this location are that the site is accessible via highway for commuting students and faculty, is in close proximity to entertainment, museums & City library, and is in a fully built out area. Hopefully that location would draw well from the surrounding communities.

If the City of Hartford decides to build a new City Hall, then they should put it on one of the vacant lots north of Interstate 84 near the new Public Safety Complex. Let’s use a public building like City Hall as an anchor to build critical mass in Downtown North. And let’s save the most valuable lots in other parts of Downtown for taxable development.