There is a vacant lot at 510 Farmington Avenue in Hartford’s West End that I go by all the time. It used to be a gas station once upon a time, and back in the mid 2000s there was talk of putting up a building with residential over retail. I unfortunately can’t find any links related to the proposal that are still active.

Here is the site as of yesterday. This picture is taken from the intersection of Girard Avenue and Farmington Avenue facing to the northwest. 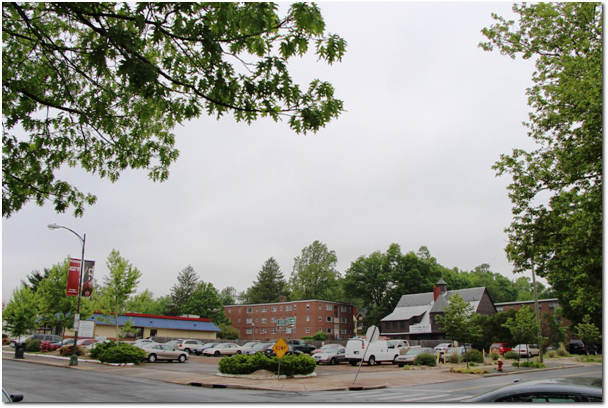 If you look closely in the picture, you can see a big white sign on the left side of the picture next to a street light. It says that the property is for lease and lists a phone number. I gave them a call to ask if there are any redevelopment proposals in the works. No response yet, though to be fair I just called for the first time this morning. I’ll do an update if they get back to me with any noteworthy information.

I actually like the idea of putting up a building with residential over retail. The neighborhood seems like a prime area for apartments with the existing commercial activity along the Farmington Avenue corridor. There is very good public transportation with the bus running every 10 minutes or so Monday through Saturday, making it easy to get to either Downtown Hartford or West Hartford Center. If the real estate market ever got hot again, the building could be converted to condominiums.

It’s less clear what would go into the retail space on the ground level. The neighborhood already has retail vacancy, so adding more supply isn’t an obvious win. Perhaps higher quality space would attract professional office uses. Or maybe the new space could be used to move existing business (like Burger King and Ichiban) out of their current buildings to free up another large development lot.

What would this look like on the site? After thinking about various options, I decided to see what would happen if I cut and pasted part of the Hollander building at 410 Asylum Street on the site. I really like the look of the Hollander building, but don’t think the full 6 stories would be appropriate for the West End, so I hacked off the top two levels. That leaves us with three floors of apartments over the ground level retail.

Here is what that looks like superimposed over the picture of the empty lot from above. 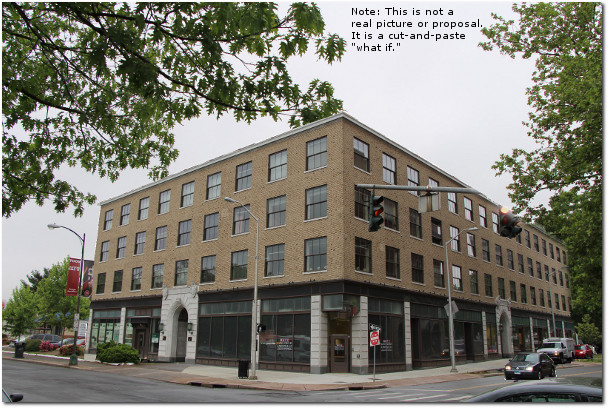 Again, this is not a real picture, not that my crude photo editing skills would fool anyone. This is not even a real proposal. This is for discussion purposes only.

Any other thoughts about what should happen on the site?