While reviewing real estate transaction data, the following chart caught our attention. It shows the number of single-family home sales that have closed in Hartford County over rolling 12 month periods. Said another way, each data point is the number of total sales over the previous 12 months. Note that this chart has nothing to do with values, only transaction counts. 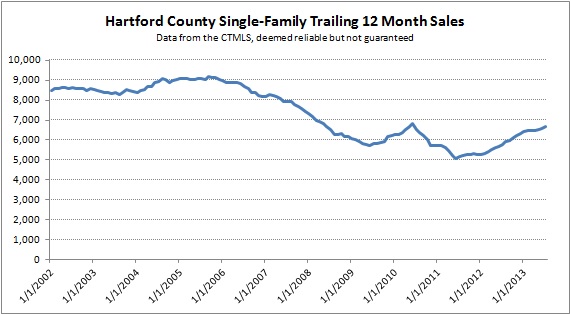 The line in the chart bounces around in the 8,000 deals-per-year range from the beginning of the data through a peak in September 2005. From there it begins to fall off and makes the low point in June 2011, before turning upwards again. But the bottoming of the market is not smooth – the peak in June 2010 is what stands out to me.

The economy of the late 2000s was defined by the financial crisis that began in the housing market and spread to most corners of the financial markets. The government made multiple attempts to fight the ensuing recession, one of which was directed specifically at the real estate markets. Beginning in 2008 buyers could get help with their purchase through a program that evolved over time – see the end of this article for descriptions of the program. The June 2010 peak in the graph marks the end of the Federal Homebuyer Tax Credit Program.

Were the government’s efforts effective? What did the Tax Credit accomplish in Hartford County?

The Tax Credit appears to have motivated buyers to act when they otherwise would not have. It is very easy to imagine a smooth curve from the 2005 market peak to the 2011 market bottom and the back up again. We worked with many buyers during that period who were counting the tax credit as one of their reasons to buy. The Tax Credit added liquidity to the real estate market, which benefited sellers and everyone involved in the transaction process (real estate agents, mortgage lenders, real estate attorneys, etc.)

The Tax Credit does not appear to have been responsible for turning the real estate market around. Buyer activity plummeted after the credit expired in June 2010. Deal count did not find a bottom until the year after the Tax Credit expired.

It’s not clear if the Tax Credit prevented market activity from falling even lower. One of the main challenges of economics and studying any real world market is that there is no control group. We do all these experiments on the economy and can only guess at how it would be different if we had pursued an alternative path.

That said, there was definitely an element of opportunism among buyers. Of their multiple reasons to purchase a home, the tax credit was mostly responsible for the timing. Our view is that nobody decided to buy a home solely because of the credit … the tax credit didn’t create demand for real estate.

The financial crisis was caused by too many marginal buyers purchasing, so the buyer pool was more conservative during this period. And even if they weren’t, mortgage lenders were much more strict with their underwriting standards. The homes that were purchased during the tax credit era were bought by people who wanted a home. These buyers understood the tax credit was a unique opportunity, and some were willing to change their timeline in order to capture it.

The Tax Credit may have actually delayed the deal count bottom in this area. By encouraging buyers to accelerate their purchase (in order to get the free money), the credit depleted the buyer pool and left a big demand void in the fall of 2010. The market basically shut down in June that year. Had the tax credit not pulled all those deals forward, then it’s possible that the bottom of the market would have happened sooner.

The previous argument, that the credit delayed the deal count bottom, may be both true and also not particularly interesting. It assumes that the real estate market operates more or less independently from the rest of the economy. It doesn’t. Home buyers not only need to have jobs, but to also feel secure enough in their employment situation to make the commitment to real estate. Along this line of thinking, the housing recovery happens when the overall local economy turns around – layoffs stop and firms begin investing again.

Our overall conclusion is that the Federal Homebuyer Tax Credit had no meaningful effect on the local housing market. It shifted the deals around, and gave those of us in the real estate industry something to talk about, but at the end of the day the housing market began to recover after the credit had expired and once the local economy stabilized.