We’re not the political sorts, but every now and then real estate and politics intersect. Last week someone made a real estate based attack on one of the Democrats running for Mayor in Hartford. It was a misleading attack (we believe deliberately), but got us looking at the homes of the two candidates vying for the top line on the November ballot.

Two Democrats will be on the September party primary ballot in the City of Hartford. The party endorsed Luke Bronin, while incumbent Pedro Segarra leads a full challenge slate. The homes of the two candidates share a surprising number of similarities. 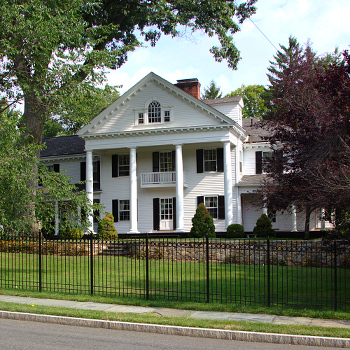 The current Mayor, Mr. Segarra, lives in the West End neighborhood. His home is on prestigious Prospect Avenue, which forms the City’s border with West Hartford. When his partner bought the home in 2001 it was marketed as having 6 bedroom and 7 baths over 5,500 square feet of living space on a 0.51 acre lot. The description noted that it had mahogany library, 5 fireplaces, and an au pair suite on the third level.

During his time on Prospect Avenue, Mayor Segarra and his partner have improved the home considerably. The lot is lovingly landscaped, and meticulously maintained. There are multiple outside entertaining areas, a circular driveway with covered pull-through, and a tall metal fence. The home is in excellent repair.

The challenger, Mr. Bronin, lives in the Downtown neighborhood. His home is literally the only single-family residence overlooking Bushnell Park, making it a one-of-a-kind property. It was purchased privately, so there is no marketing information is available. The City Assessor’s records show the home as 4 bedrooms and 4.1 baths over 5,227 sqft of living space on 0.077 acres.

Since the Bronins bought their home in 2012, they have completely rehabilitated the property. Their renovations were featured in the July 2104 issue of Connecticut Magazine, which described the Alice Washburn Award they won from the Connecticut Chapter of the American Institute of Architects.

Both Mr. Segarra and Mr. Bronin live in homes that are similarly sized, and of similarly high quality. They reflect the different styles of the owners – a gated West End estate on the very edge of town for Mr. Segarra versus a park side Brownstone in the heart of the business district for Mr. Bronin. Both men live well, in homes that are in the top tier of Hartford real estate.