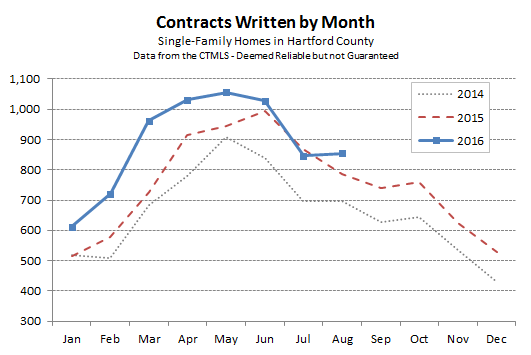 Hartford County finished the month of August with 855 single-family contracts. The total was an increase over the prior month, and a return to significant outperformance over the prior year. On a year-to-date basis, 2016 is about 12% ahead of 2015 in terms of the total number of contracts signed.

The August result makes the July data point look like the outlier. This year had been consistently more active than last year beginning right away in January, and continuing through June. Although the gap narrowed considerably in June, it was unusual strength in June 2015 that closed the gap rather than weakness in June 2016.

It was somewhat surprising that the August contract total exceeded the July total, but not unprecedented. Since we began tracking contracts using this methodology in 2009, there have been 2 other years in which August was more active than July, and one year in which they finished with the same number of deals.

Real estate markets are active in the summer months, as August showed, despite being after the “spring market” has ended. We think of the market as being pretty consistently active from March into November. Casual home buyers are less inclined to think about real estate over the darker and colder winter months, and especially during the holiday season at the end of the year. But otherwise there are usually buyers looking for homes.

The “spring market” builds on the baseline activity level with a combination of pent up demand that formed over the winter, and the subset of buyer and sellers that scheduled their transactions to coincide with the end of the school year. The magnitude of the “spring market” varies from town to town, and from neighborhood to neighborhood. There are more buyers and sellers active in the spring, but it’s a mistake to think that the spring is the only time it’s possible to buy or sell a home. 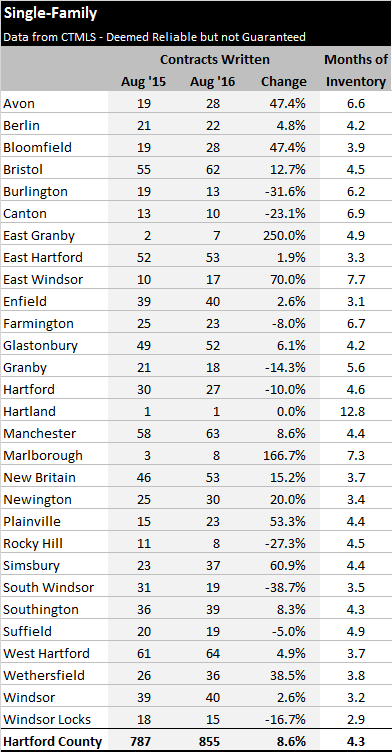