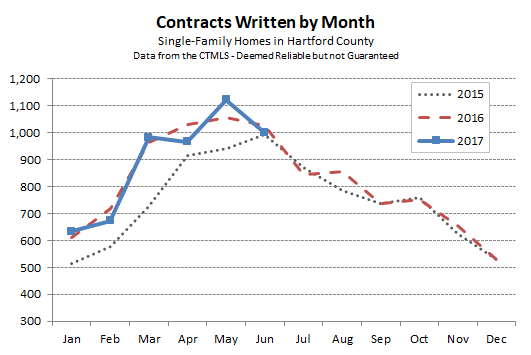 Hartford County finished June 2017 with 1,000 single-family contracts. Hitting four digits in a month is rare, a level of activity that the market only reaches during spring months of busy years. Despite reaching the 1,000 deal milestone, the month trailed the activity level of June 2016 by about 2.6%. On a year-to-date basis, 2017 trails 2016 by 0.5%.

Town-by-town results (below) are often widely scattered, but June’s results seem to be exceptionally diverse. Even in the smaller markets it’s unusual to see outperformance or underperformance of more than 50% for a month. Five of the 28 towns had at least a 50% swing in the number of deals compared to June 2016.

The year-to-date trends also show quite a bit of diversity. Many, but not all, of the less dense suburbs to the west and north of the City lagged last year’s performance by over 10%. At the other end of the spectrum, East Hartford and Manchester recorded the two largest increases in deals. East Hartford is 59 contracts ahead, while Manchester is at +57 contracts.

Inventory of active listings continues to follow the same trend we have been reporting for years. In the County overall, it is a seller’s market for properties worth less than $200,000, a neutral market for homes between $200,000 and $400,000, and a buyer’s market for prices above $400,000. The dynamics of individual towns definitely vary, but the general trend typically holds. Sellers have the advantage at the low end, while buyers have the advantage at the high end.

Although the summer has the reputation of being a slower period for real estate, the chart at the top shows that July and August are still active months for buyers. We’re looking forward to keeping the year going as we work with our buyer and seller clients. Let us know if you need some real estate help! 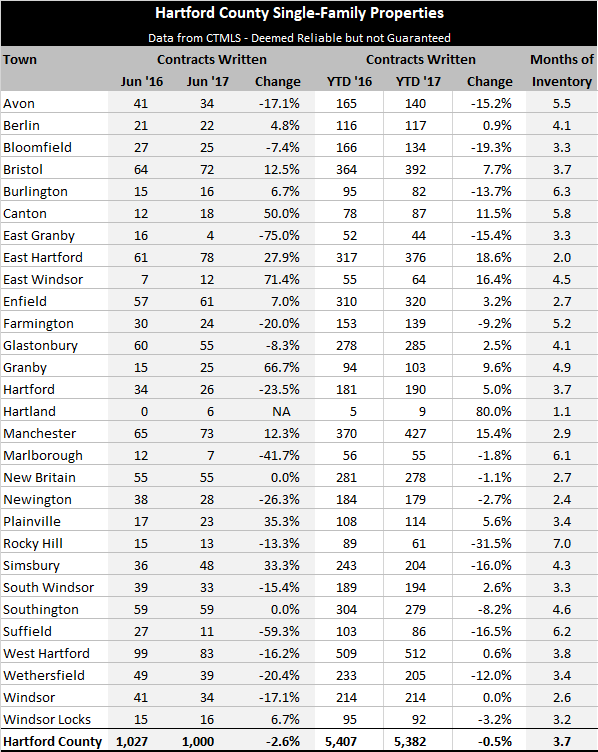