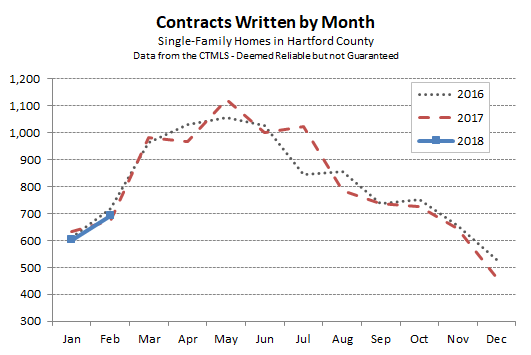 After the first two months of the year, the Hartford County real estate market remains on trend with the prior year. The number of single-family contracts in February was 2.7% ahead of the same month in 2017, bringing the year-to-date total to only 1.1% (15 deals) behind 2016.

There is not a lot of data to work with at this point in the year, so we generally refrain from trying to draw too many conclusions. But it is difficult to look at the town-by-town numbers and not wonder what is going on in some of the markets showing the largest changes from 2017.

West Hartford is at the other end of the spectrum, with 97 deals so far, compared to 143 through two months in 2017. This situation is easier to explain when looking back at historical data. Beginning in 2012, the two month totals for West Hartford were 86, 102, 79, 84, 115, 143, and 97. The current year total is therefore not a huge miss, but is instead a reversion to the normal range in the County’s most active town market. All indications are that West Hartford is doing just fine this year.

The general trend continues to be that buyers are active despite the erratic weather swings, and that many towns are experiencing low inventory levels for the number of buyers shopping for a home. Supply and demand should balance out as we get further into the spring, so we expect that 2018 will be another strong real estate year.