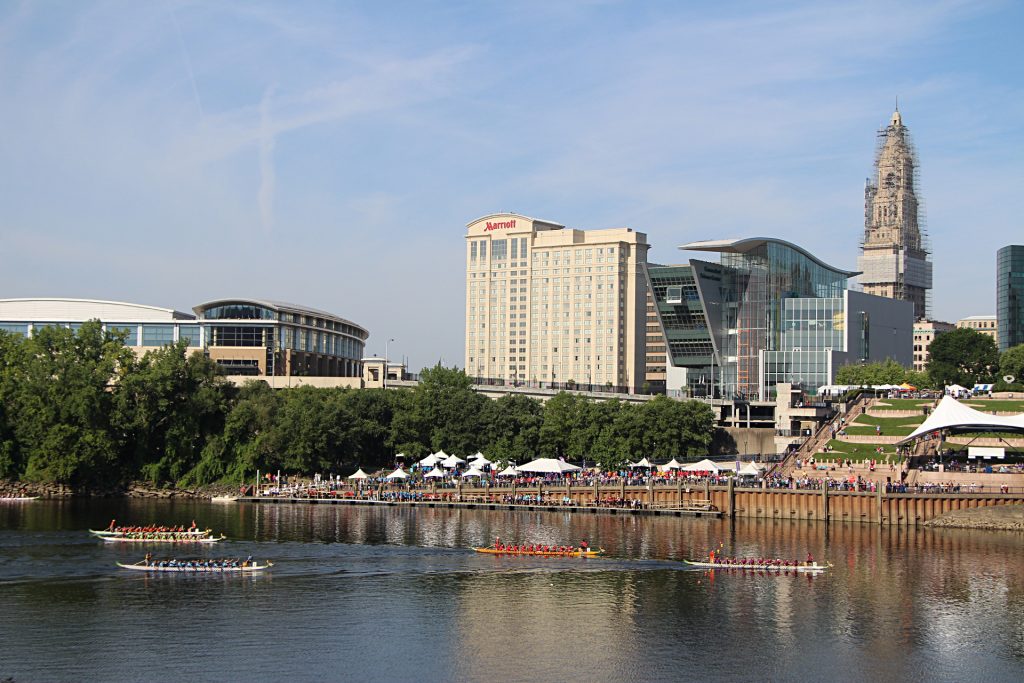 The old saying that a rising tide lifts all boats takes on new meaning now that we know that sea level is actually rising in addition to the tide.

Regional differences in the impact of sea level change will prevent everyone from sharing the same outcome as the water advances. Many areas will struggle with higher tides, while others will benefit. Hartford, as an inland metropolitan region, has an advantage over our coastal neighbors.

Articles about rising sea level appear regularly in the news, as the consequences of global climate change become more obvious at the water line. Most of the coverage can be divided into two categories; reviews of the scientific consensus and the latest published research, or profiles of regions threatened by the rising seas. This is a quick look at rising sea level and the opportunity it creates for Greater Hartford.

The most recent consensus report on climate change (AR5) was issued in 2014 by the Intergovernmental Panel on Climate Change. The report concluded that humans have influenced climate change, and that recent climate changes have had an impact on humans. Since so many major cities are on the coast, serving as home to such a high percentage of the world’s population, an increase in sea level is of concern.

Sea level is rising for two primary reasons, both of which are related to warmer air temperatures as greenhouse gases trap more and more of the sun’s heat in the atmosphere. Warmer air melts land ice, and much of the resulting water eventually makes its way into the oceans. Warmer air also warms ocean water, which in turn causes the water to expand.

Scientists have measured a 3.4 inch increase in sea level since satellites began to collect data in 1993. Before the satellites came online, scientists tracked sea level using tidal gauge records, which showed that sea level has been rising since at least the beginning of the 1870s, and is about 9.8 inches higher than it was when observations began (data source: NASA).

The consensus projections when AR5 was published in 2014 were that sea level is likely to rise between 15 and 24 inches by the year 2100, depending on our ability to limit the future release of greenhouse gases. The highest potential sea level rise by 2100 that AR5 reported was nearly 36 inches if no progress in limiting greenhouse gases is achieved. (source: AR5, see Figure SPM.6(b) on page 11 of the Summary for Policymakers)

Since AR5 projections were released, new scientific studies have reported that land ice is melting faster than expected, and that existing estimates of sea level rise may be too conservative. The additional melting has been observed on portions of Greenland and Antarctica that most actively interact with the ocean.

As a point of reference, scientists estimate that there is enough ice on Greenland to raise sea level by about 20 feet. Antarctica contains enough ice to raise sea level by about 200 feet. Fortunately, neither the Greenland nor the Antarctic ice sheets are expected to completely melt during the next century, even if we do everything wrong in managing the environment. But it does show that increases of sea level of more than the 36 inches contemplated in AR5 are definitely possible. And if the new peer reviewed studies are taken at face value, higher increases are now considered likely.

Sea Level in the United States

The baseline assumption about sea level rising two feet poses challenges to numerous US regions, before even considering that the two additional feet of water may arrive sooner than expected. The pace of profile articles has increased in recent years, as more regions see the impact of the current water line.

Florida faces a considerable amount of risk because of its low average elevation and because most of the population is on the coast. Miami gets profiled frequently because they already experience regular tidal flooding in some neighborhoods. Storm surge from periodic hurricanes make the situation worse. There was an article at the end of 2017 describing “climate gentrification” in which money was flowing into a historically low income neighborhood, and pushing out long-time residents, because its average elevation of 11 feet above sea level made it less prone to flooding and an attractive investment opportunity. An article from May 2017 covered the same themes from a different perspective.

The Louisiana Gulf Coast was recently profiled in the New York Times. The series cited a USGS report that found the state lost 2,000 square miles of coastal wetlands to rising seas since 1932, which is about the size of the entire state of Delaware. New Orleans, much of which is below current sea level, is protected by a flood control system that failed during hurricane Katrina in 2005, and was reported to be in poor repair last fall as hurricane Harvey threatened.

New York City is surrounded by water, and likely has the most valuable collection of real estate in the entire country. Flooding has become more common in the City, which is highly dependent on the subterranean public transportation system.

Boston is on the water too, and a significant amount of its land was created by filling in the harbor. Its important infrastructure includes a partially underground subway, the highways of the Big Dig, and an airport on reclaimed land. The brand new Fan Pier neighborhood flooded twice so far this year during nor’easters, prompting Governor Baker to announce plans to file legislation to address climate change.

Risks associated with rising sea levels are not new to any of these coastal regions. The Miami-Dade County Sea Level Rise Task Force issued a report in 2014 with specific recommendations. The Task Force felt that the region needed to “reinvent our urban infrastructure.”

The New York State Sea Level Rise Task Force issued a report to the State Legislature at the end of 2010. It contemplated sea level rising by as much as 55 inches by 2100, and warned of infrastructure damage as areas flood more frequently during storms. New York City has their own report and plan, which is being updated at the time this article was published. A previous version of plaNYC included an interactive flood mapping tool to show the expected extent of high tides and flood plains in the 2020s, 2050s, 2080s, and 2100. They appeared to be expecting 36 inches of sea level rise by the end of the century, versus the 55 inches in the State’s Task Force report.

The State of Massachusetts is actively working on a State Hazard Mitigation and Climate Adaptation Plan that builds on a 2013 Plan. They have an updated draft risk assessment out, and are working on strategies and action items. Their analysis for sea level rise is that the median (most likely) increase in Boston will be 2.3 to 3.0 feet by 2100, with the increase unlikely to exceed 8.2 to 9.7 feet.

Although sea level rise is the only threat we’re discussing today, there are other environmental effects that will be caused by climate change. A partial list includes changes to temperature and precipitation patterns, increases in severe storms, and new flora and fauna.

Hartford has an advantage over many other regions, particularly with respect to sea level change. We are not on the coast, so rising sea level and tidal flooding will have a modest direct impact on us. However, the state does have a meaningful amount of shoreline, and Connecticut’s leaders need to think carefully about how we plan for the coming environmental changes.

Taking a step back, it is clear that rising sea level will impact the region and the State. Adding 5+ feet of water in Long Island Sound will create new challenges in Hartford, particularly when the river crests, but the challenges will be very different than those faced by coastal cities.

We encourage readers to ask what your organizations are doing to prepare for rising sea levels. We want the region to be thoroughly prepared, within the various levels of government, within the private sector, and within the non-profits.

Even the indirect impacts can be scary. For example, what is the State of Massachusetts going to do as Greater Boston and the Cape are directly threatened by rising sea level? Will they invest in sea water defenses and try to preserve all of their coastal infrastructure? Or will they abandon the coast (e.g. Logan) and rebuild further inland? Both options sound very expensive for the State’s taxpayers, who will be on the hook for some big ticket items.

Greater Hartford needs to address rising sea level in our long term planning. If we can limit the risks (State expenses) on our own shoreline, and prepare our regional infrastructure, then we will have a compelling story to tell about our future as the sea level rises.