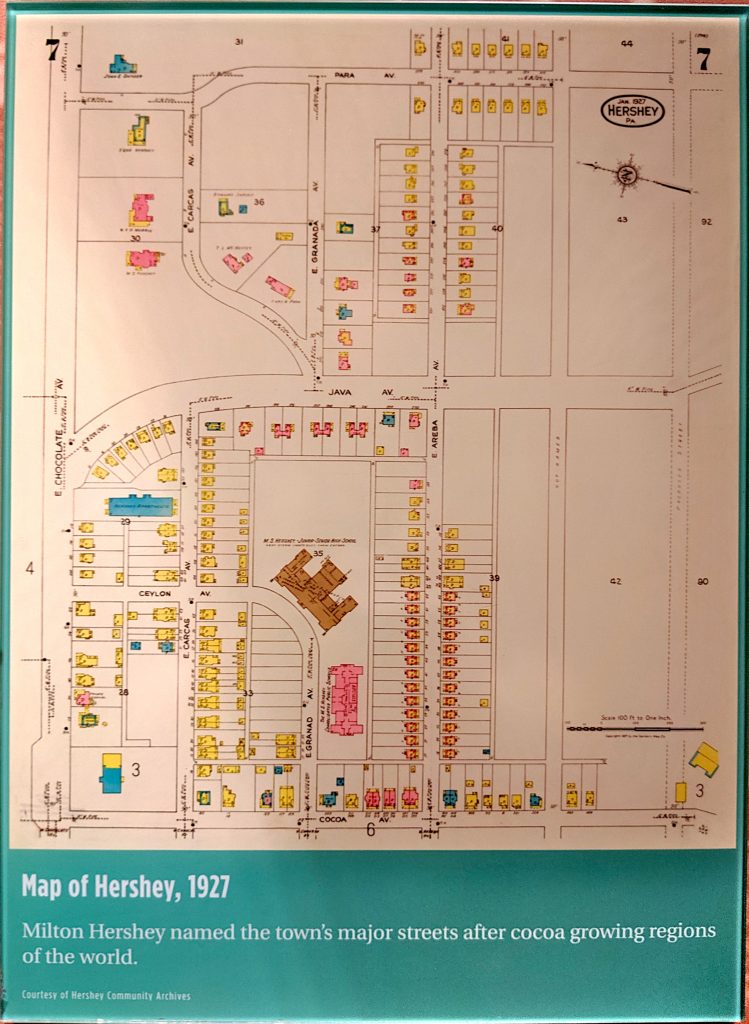 Our non-work adventures recently took us to Hershey, Pennsylvania for sightseeing. It turns out that the town was planned by the chocolate mogul himself to be a form of “company town” like he had seen in other parts of the world.

His spin on the idea was to try to be nice to his workers by encouraging homeownership, selling homes at affordable prices, and providing easy payment plans to finance the purchases. He also encouraged independent entrepreneurship in town rather than forcing everyone to patronize businesses that he controlled and profited from.

Walking the streets to see the layout of the neighborhoods in real life was interesting. Streets that were designed to be worker housing were mostly side-by-side duplexes. Many were brick, and all of the original homes were attractively designed in the style of the early 1900s. They would fit right in to neighborhoods of that vintage in Greater Hartford.

A big difference was that there are no driveways, despite the town being planned in the automobile era. Instead, every other street in the grid is actually a narrow alley that accesses garages at the rear of the lots. The alleys are visible on the map, though in real life they are more pronounced since the town is much larger than is shown on this drawing.

A few streets were designed for upper management housing. They had larger single-family homes, on larger lots, and generally did have a driveway back to the rear garages that were common for the era.

The original plan for the town clearly included grouping people into different zones based on their income level at the company.

That said, the zoning was not meant to keep the different groups in their own separate bubbles. Hershey wanted to foster a sense of community by having all residents share the same common town amenities and activities. Everyone went to the same schools, they utilized the same recreational facilities, and they attended the same performances and events in the enormous community building.

There were some things that Milton S. Hershey would absolutely not allow in his town. The explicit restrictions included “bans on pigpens, chicken coops, saloons, and unapproved fences.”

Sounds like he was going for a benevolent dictator sort of vibe.