Zillow has an iBuying operation. Zillow is also a public company. Therefore they regularly disclose their financial results to the investing public. Their Shareholder Letter and Supplemental Financial Tables contain interesting details about their flipping activities. (Note: There are other iBuyers who are private companies, and the expense analysis likely applies to them too.)

It was surprising to me that their relatively new Homes Segment represented 41.5% of the company’s total revenue. I think of Zillow as a media company since their original business was to sell ads against their content and sell leads to agents.

They will soon be generating the majority of their revenue by churning homes as a flipper. The “Summary” section of the Q2 Shareholder Letter proposed future annual flipping revenue at 10x the annual revenue from the legacy media business.

The Homes Segment first showed up on the corporate income statement in 2018. Over 6 quarters, the Zillow Homes Segment reported $184.2 million in the following expense categories: Sales and Marketing; Technology and Development; General and Administrative.

This total does not count the “Cost of Revenue” expense category that definitely includes buying the homes, and appears to also include some of the flipping expenses.

It is expensive to build an iBuying platform. Ideally the operations of the iBuying business would eventually provide a return on that investment, but profitability appears to be well into the future.

Those three overhead costs decreased to 29.5% of revenue as of Q2 2019. That was dramatically better than when the program first launched, but still much higher than the 500 basis point (5%) return target that management hopes to eventually achieve on each property it flips.

Management is clearly very excited about the strong demand for Zillow Offers from consumers. Yet that interest has translated into relatively few successful purchases.

The Q1 2019 Shareholder Letter stated that Zillow “received more than 35,000 Zillow Offer seller requests.” Yet they only reported buying 898 homes, which represented about a 2.6% conversion rate. Giving the benefit of the doubt that there some closings from those 35,000 inquiries were in progress at quarter end, it is still safe to say that only about 3% of the Zillow Offers were accepted.

The most likely reason why offers were requested and then declined was that the offers are simply too low. Zillow doesn’t disclose their bidding strategy, but they do provide some hints. Here is now they present their flipping results. 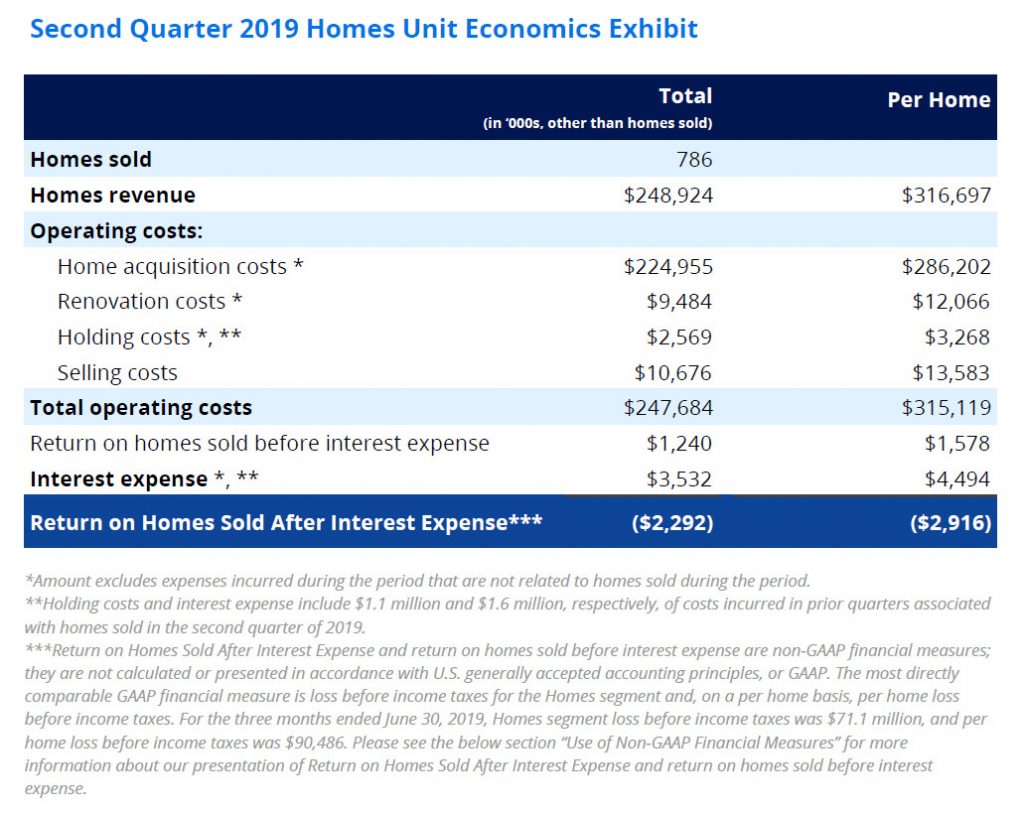 The Q2 2019 Shareholder Letter stated, “our home acquisition cost, … is the purchase price of the home, less Zillow’s service fee, an estimated renovation allowance and some closing costs. Our service fee in Q2 averaged approximately 7.5%.” This appears to list the fees that Zillow builds into the offer they make to owners.

The information provided in the Shareholder Letter lets us approximate the discount, but we have to first back into the Purchase Price (which is another term for the Offer Price).

They told us the average Acquisition Cost, and that the service fee was on average 7.5% of the Purchase Price for the 786 homes they sold. They also told us that they spent $12,066 per house on average to renovate. There is no indication of the magnitude of the selling costs that they built into their initial offer. To be conservative in estimating the discount, let’s assume no selling costs and that Zillow accurately estimated the renovation costs.

Therefore the approximate discount the average owner accepted was:

Recall that we assumed the “Some Selling Costs” that Zillow disclosed owners paid were zero since we couldn’t estimate them, so owners accepted average discounts of more than 11.2% off the nominal bid for their home. The property owner who requested the Zillow Offer would be looking at something like this:

One hopes the bid was a reasonable reflection of “fair market value,” but there is no way to tell from the financial disclosures. Zillow obviously has a financial incentive to skew the fair value to the low side. That said, the implied nominal Purchase Price Zillow offered to the owner was higher than the average revenue that they reported; $322,452 versus $316,697.

Zillow’s iBuying activity is a large part of the company’s focus. The impact on revenue is surprising, and it appears to be revenue that comes with a very different risk and return profile than the media or mortgage business segments.

The overall cost of building, promoting, and operating the iBuying platform was a significant expense that continues to grow in dollar terms even as it declines as a percentage of associated revenue. The magnitude of the expense is not really surprising, and I expect Zillow’s iBuyer competitors spent considerably more on overhead since they began their efforts without the benefit of Zillow’s existing business and infrastructure.

Finally, the economics of flipping are very challenging, and Zillow’s financial disclosures show that they have a long way to go to make it a profitable endeavor.

Although Zillow is the focus of this article, the same analysis likely applies to the numerous private companies who are active in the space. Each has their own twist on the iBuying process, and their own pitch about how they are changing the real estate world. Strip away the marketing gloss and they all have a very similar business model. They buy a house up front to draw in the customer, then they scramble to figure out how to minimize the costs involved in owning and selling the home so they can get it out of inventory as quickly as possible. Along the way they look for other opportunities to monetize the customer, either by selling add-on services or (presumably) leveraging the data they collect.

iBuying will likely continue to be part of the real estate landscape for the foreseeable future. It is a very capital intensive activity, and the profit opportunity on the house itself is structurally limited. It’s amazing how long investors are willing to subsidize money losing businesses, so iBuying will probably be around until the easy money runs out.