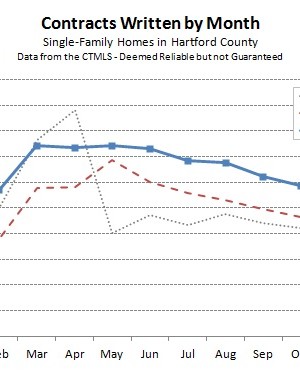 The 2012 Hartford County single-family real estate market finished the year strongly. Which really wasn’t a surprise since it had consistently shown an increase in activity throughout the year. The final count shows that the number of contracts for December was up about 10% over the previous December. This wasn’t as much market growth as we had seen in past months, but the strangeness that occurred at the end of 2011 makes the year-over-year comparisons

December single-family contracts came in at 357 for Hartford County, which was slightly higher that the number of deals that came together in November. December is traditionally the slowest month of the year, so having it outpace any other month is a bit of a surprise. We think that the usually large snow storm, which was felt through the beginning of November, worked to push some business into the year’s final month. This December also