Amy and I attended a meeting this morning at the Hartford Licenses and Inspections office. The meeting was about a food pantry being run at a church located at 870 Prospect Avenue in Hartford near Elizabeth Park. There was/is concern from some residents within the West End neighborhood that the food pantry shouldn’t be in that particular location. 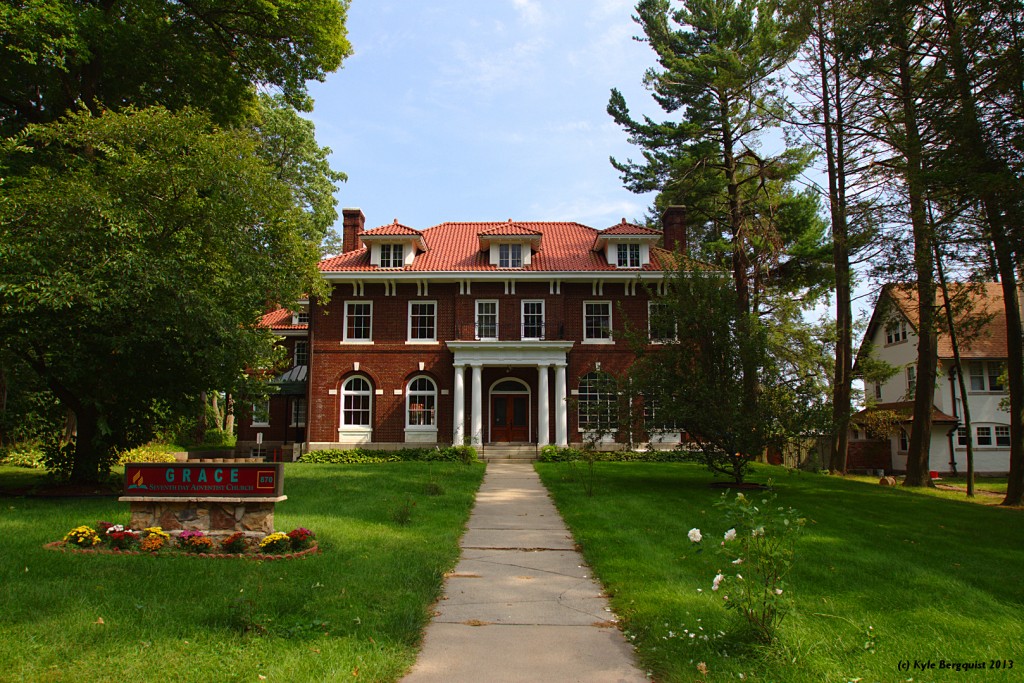 The meeting was moderated by representatives of various City departments, including Health, Licenses & Inspections and Zoning. They started by noting that the goal was to be a listening session, and that they would follow their normal processes in coming to any official decisions.

Zoning reported that the building was approved to be a church (in an R-8 zone) in 1948. Two years later, in 1950, the church also received zoning approval for the pastor to live on site. Since the building has been used as a church continuously since then, it can continue to house a church until someone stops using it as a church.

Health reported that the current owners, the Grace Seventh Day Adventists Church, secured the necessary permits to operate the building’s kitchen when they purchased the building in 2006.

At issue is a license for operating a food pantry on site, which is currently a partnership with FoodShare. Health reported that it is FoodShare’s responsibility to secure the appropriate license. They do not currently have the proper license and the City has pushed the Church and FoodShare to get it.

The Church has been operating a food pantry on site since they arrived in 2006. Initially it was something they did internally, but by 2011 it had grown to the point that they needed the additional support of FoodShare in order to meet the demand.

The food pantry serves whoever shows up, and they report helping people from the West End, other Hartford neighborhoods, and other towns in Greater Hartford. Visitors arrive using a variety of transit modes. Many drive, some carpool or ride transit, and some even walk. An average of about 180 people receive food on a weekly basis.

The Church reports actively taking steps to minimize the impact of the operation on their neighbors. They ask people to not arrive before 10:00am. They work to get people through the line and on their way again as quickly as possible. They move the line to the driveway (off the sidewalk) once the food arrives via truck. They have volunteers help manage the people in the line. And they declined to register their food pantry with 211, despite FoodShare asking that they do, as they felt their operation was growing enough through word of mouth.

It is not clear where, or when, concerns about the food pantry began in the West End neighborhood.

“One of the churches on Prospect is running a food pantry. If you have any comments/concerns about the pantry, please call or email me with your thoughts. The License & Inspection office is holding a meeting next Thursday morning, 9/12, at 9 am. At that time, they would like feedback from WECA on the pros/cons, impact to our neighbors. If you would like to attend the meeting next Thursday, please let me know and I can provide the details.”

WECA voted to take a formal position during their September 10, 2013 Board Meeting, subsequently distributing this statement to members via email:

“WECA supports enforcing the R-8 zoning regulations which do not allow this type of activity at this location on Prospect Avenue. We believe the pantry is a necessary and noble cause and would like to work with the church to find an alternate location that does meet zoning standards. The board discussed your feedback and also reviewed WECA’s strategic plan and used both to finalize this position.”

WECA’s President conveyed the group’s position at the meeting, emphasizing the zoning aspect as the primary concern and traffic as a secondary issue. She noted that WECA does not want to see the services provided at the church expand into things like a shelter or school, which they feel would also be inappropriate for the R-8 zone.

One member of WECA shared concerns about the food pantry. Charlie Ortiz, who is the WECA Membership Chair and lives on that block of Prospect, reported that he has received a number of calls from neighbors. One Wednesday he investigated and observed food pantry traffic impeding an ambulance and a wheelchair-bound individual unable to navigate the sidewalk. He offered to share photos. He also noted that West Hartford residents in that area called the police because of the traffic.

The Church said that they did not know that neighbors or WECA were concerned about the food pantry. They also didn’t know that the West End was in communication with the City on the issue until a TV crew approached them last night. They found out about this meeting via the media, the night before it was scheduled to be held. Nobody from WECA communicated that group’s concern to Church leadership.

The Church encouraged WECA to approach them directly, as the Church makes every effort to be good neighbors. They asked if they could join WECA.

The Church reported being open to conversation on this particular issue. They noted that the food pantry generates much less traffic than events at Elizabeth Park, and is held in the middle of the day, which avoids rush hours.

Councilperson Jennings spoke on a number of topics, noting that insufficient food supplies are a contributing factor to the City’s larger problem of violence. She encouraged WECA and the Church to work together in public, as neighbors, and across racial lines, to figure out a way to support the pantry despite any zoning hurdles that may arise. She emphasized the importance of communication, and said she would be open to approaching the City to try to secure police resources to monitor the traffic, if that would be helpful.

Church members spoke in support of the food pantry and the effort they go through to run a positive and successful operation while fulfilling their primary mission of helping the less fortunate.

Multiple citizens raised the concern that WECA’s objection to the food pantry may be racially motivated.

One attendee suggested that the Church invite WECA to come volunteer at the food pantry so that WECA membership can learn more about the operation and experience it first-hand.

At that point the meeting wound down. A network news camera was present, so there will likely be video of the meeting available in the near future.

The two main action items were for the City. The representative of the Health Department said that he would visit the site on Wednesday 9/25 to observe the food pantry in action. The zoning representative said that he would research the “accessory use” question to make a determination about whether a food pantry is part of a church. It was also apparent that WECA and the Church engage in a direct dialog on the issue.

Thank you to Ms. McAdam and Mr. McGregor for providing additional information. To highlight what they wrote, Ms. McAdam reported that FoodShare is not responsible for securing the food pantry license because they are providing food and technical assistance, and not actually operating the food pantry. And Mr. McGregor reported that the Church has secured a license from the Health Department to operate as a food pantry. Both shared additional thoughts as well, which can be seen in their entirety below.

20 thoughts on “On the Food Pantry”