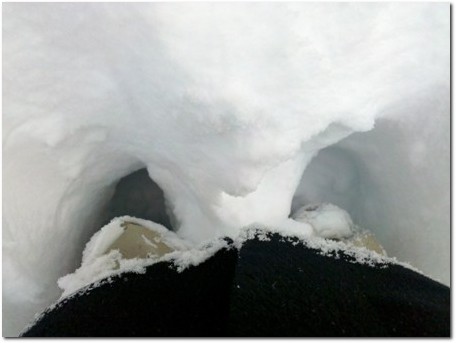 I had called the listing agent for the house the previous day because it was a fairly expensive short sale and I wondered how involved the bank was and if it would be a quick turnaround if my client was interested and put in an offer. I’ve had other clients wait months and months to hear nothing back from the bank, so it’s nice to at least have some idea going into it. The listing agent assured me that the bank was on board and it would be a quick turnaround. They also warned me that the house was vacant and that it probably hadn’t been plowed, so be prepared to deal with snow. Oh fun. I told my clients to wear their boots and I would do the same.

I arrived at the house about 15 minutes before my clients were supposed to meet me so I would have adequate time to open up the house and deal with the snow. When I got there I realized that there had been no snow removal the entire winter. Awesome. The house was also set up on a hill, so I would need to trudge up the driveway about 150 feet to get to the house and the front door. Which of course had about a 6 foot snow drift because of the roof above dropping snow on it. Awesomer.

So I started trudging up the driveway. That’s a picture of me, above, taken by my cell phone camera. At first the snow came up to my knees. Then I kept sinking in further and it was up to my mid thigh. This house is located in a fairly remote area so they have gotten tons of snow. It’s also near a hiking trail and there were some folks out with snowshoes and their dogs, marveling at me as I schlepped my way through the snow to the front door. Talk about a dedicated real estate agent. Or a crazy real estate agent. You pick.

I finally made it to the front door and was happy to see the electronic lockbox where it was supposed to be, and working. But then I looked in the sidelight window next to the door and saw water on the hardwood floors. Uh oh. I opened the door and there was a running water sound. Not a running water sound like a faucet is running. A running water sound like something is gushing water. “Uh oh” quickly turned to some expletives. I walked in to see water all over the hardwood floors in the kitchen/dining room/family room area. The ceiling above the dining area was soaked and water was pouring from that area. Awesomest.

You guessed it, a pipe burst. I quickly turned around to try and find the source of the water which was apparently coming from upstairs. I went upstairs and saw that a bathroom in one of the bedrooms appeared to have blown something in a shower stall. I didn’t investigate too closely because by that point I was skeptical about the integrity of the floor based on all of the water that was downstairs.

Now I’m on the phone with the listing agent’s office telling them that they’ve got a big problem on their hands. They took the information and said they would start making calls. The listing agent didn’t have a cell phone number that is given out, so I called the only number listed for them and left an urgent message. I then also called a team member they have and left a message for them.

I wondered if I could potentially find the water shutoff in the basement to try and stop things. I trudged down to the basement to find water all over the floor and leaking through the ceiling there too. I thought the electricity was off, but wasn’t sure and then thought to myself “Really? This is a vacant house where they don’t have the heat turned on. There are no lights for me to see anything. How much more should I be doing here? And what if I do find the water and something else happens as a result causing more damage?”

I went upstairs again and called the listing office for a second time. They hadn’t been able to reach the listing agent either, but said they left an urgent message for them too. I said I was going to go and that whoever was coming needed to prepare to walk through thigh-high snow drifts. They thanked me for calling and said that I had done what I could, so I should just go.

I then called my clients and told them not to come to the house. It wasn’t safe and they weren’t going to want to buy it at this point anyway.

Talk about a disaster. What was once a very nice house now has significant damage and I have my doubts whether the owner’s insurance company will cover any of the damage costs. The house was vacant and the heat was off. The lack of snow removal will show that the house was not inhabited. Sometimes I wonder what people are thinking.

This was by far my worst (non)showing to date.

11 thoughts on “My Saturday Showing Debacle”