Single-family contracts dropped to 694 for the month of August, which is a continued fall-off from the spring peak yet still outpacing the 2012 results. On a year-to-date basis the 2013 deal count is about 8% ahead of where we were in 2012 as of the end of August. 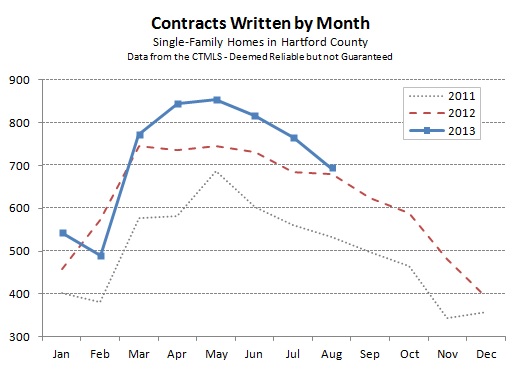 From an agent’s point of view, the market felt quiet in August. Deals still came together, but the pace was noticeably slower than it had been earlier in the summer. Our broker’s theory is that for the first time in years people had enough money to actually leave town for a vacation (rather than taking stay-cations) and so there just wasn’t a lot going on in August. 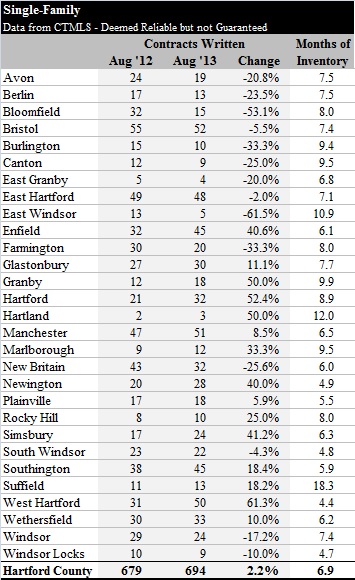 The last week of the month saw an uptick in calls and general inquiries, though it was still a mixed bag for showings and writing contracts. We think this signals an increase in activity for the coming months and a more defined “fall market” than we have seen in the past few years. Looking at the chart at the top of the page, we have recently been seeing a peak in contracts signed in May and then a gradual decline into the winter months. This could be the first year in a while that shows a secondary peak in the September and October months before the market shuts down for the year.

Town by town data shows that August was quite erratic. Many towns saw a sharp decrease in activity versus 2012, while others showed a meaningful increase. Without digging deeper into the data it is difficult to know why a town experienced a dramatic swing. For example, West Hartford had 19 more deals this year than last year, while Bloomfield had 17 fewer deals. In both cases it turns out that the August 2012 number is the outlier – it was West Hartford’s worst month of the year and Bloomfield’s best month of the year. Which is odd since August is rarely the best or worst month when looking at the traditional seasonality of the market.

Inventory is climbing at the county level, up from 6.2 to 6.9 since July 2013. Recall that this metric is the number of months that it would take to sell all the active listings at the current pace of contracts. Results in the 3 through 6 month range are considered a neutral market. Under 3 months of inventory is a seller’s market, while more than 6 months of inventory is a buyer’s market. So the county overall is trending back into buyer’s market territory. As always, individual buyers and sellers need to consider the dynamics of their particular sub-markets before deciding on their strategy. There are still sub-markets in Greater Hartford that favor sellers.