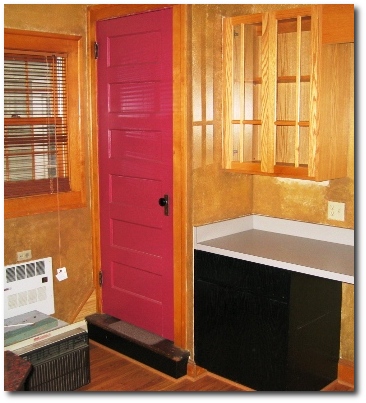 We thought that designing a new kitchen would be relatively straightforward. Really, how hard could it be? Pick a cabinet design, choose the appliances, then the finish details, and away we’d go. We already had a good idea of what we wanted in a kitchen, so we thought the design part would be easy.

As it turned out, there were a number of challenges that we did not foresee. The shape of the room was the first we encountered. We wanted to consider alternative layouts, but after doing some quick sketches it was clear that the room was not quite wide enough for many of the ideas. In addition, the many windows and doors also made alternative layouts tricky. Our current kitchen has more of a modern feel, and we forgot to consider the details, like moldings, when thinking about a traditional remodel. Designing a space that met our needs, while remaining within our budget, proved to be the final hurdle.

Fortunately, we’re not trying to do this project on our own. We know Christian Winkley of Oxford Builders quite well and have been impressed with the work he has done in the neighborhood. Christian introduced us to his brother, Josh Winkley, who designs and builds custom cabinetry as Maple Tree Cabinetmakers. Together they have guided us through the design process to make sure the remodeled room will be functional, look great, and come together smoothly.

Here are some of the specific issues that we’ve discussed in detail:

We were interested in a much larger opening between the kitchen and the butler’s pantry than the current standard door, and had convinced ourselves that removing the wall entirely would be the best solution. Josh was initially fine with the decision, since it made the cabinet layout easier, but quickly realized that it didn’t feel right to him. He mocked up a version that contained a framed door and asked if he could come back to talk about it. We went over the pros and cons, but at that point still kept the unframed opening in the plan. Fortunately, Josh didn’t give up. He consulted with Christian about the decision and came back a second time with both a stronger argument and a more refined mockup that addressed many of our concerns. We’re now planning to do a framed door to provide a distinct transition between the two rooms.

Josh has also been influential in numerous other design details, helping to make sure that the project will all come together at the end. We’ve talked about how the cabinets should look in the butler’s pantry, and how to do the chair rail in the kitchen. He’s figured out how to make the oversized sink we planning to get work from both a logistical and an aesthetic standpoint. And we’ve debated at length about where best to put the trash can in the finished room.

Our kitchen remodel would turn out very differently if we had not gone through a detailed design process with Josh and Christian. We’re excited about the project and very glad that we’ve had them making suggestions about how to do things better, and in many cases simply handling details that we would otherwise not notice. Being able to rely on their experience makes us much more confident that the final result will be both functional and beautiful.

3 thoughts on “Designing a Kitchen”