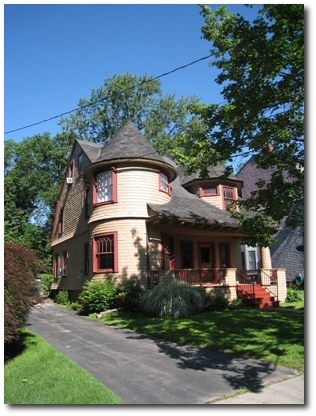 Note: This post continues our series on Saving a West End Home.

Jan Klein thought about the run-down house next door again. She’d been thinking about it a lot since it was listed for sale. It was an attractive home, one with a considerable amount of architectural character, but it was in desperate need of a new owner who would be willing to take on the years of cumulative wear.

As a long-time resident of the West End, Ms. Klein, who co-chairs the West End Civic Association’s Architectural History & Resources Committee, knew that maintaining the neighborhood’s historic homes properly, with the right styles and materials, was challenging and expensive. But she also knew that when maintained properly, a West End home was structurally every bit as solid as a brand new home, and almost always more beautiful. Ms. Klein was more aware than most that the new buyers could take the property in one of two directions. Either they would commit to gradually restoring its former glory or they would simply be happy to purchase such a grand home for a bargain price and allow the decay to continue. Given the asking price, she was very concerned about the latter scenario. She had seen it play out at other properties.

With her mind searching for a way to rescue the home, it seemed as though fate intervened when the Winkley family walked into Monte Alban, where the Kleins were dining, on a dark winter evening. The idea didn’t come at once, but Ms. Klein quickly realized that convincing the Winkleys to move next door was an ideal solution. Christian Winkley was the owner of Oxford Builders, a West End resident, and he and his wife Kate were active members of the committee that Ms. Klein chaired. He was very well regarded for his woodworking skill and ability to restore historic homes. Unfortunately for Ms. Klein, the Winkleys declined her suggestion that they consider buying the home for themselves. They were not in the market for a single family property.

Weeks turned to months, and the asking price gradually fell. Friends that Ms. Klein told about the house showed initial interest, but all eventually concluded that the property would require too much work. Determined to save the home from an inattentive owner, she began to consider more direct action. But even buying the home herself would not solve the problem – the purchase price plus the cost of repairs would be too much. Once again her thoughts returned to Mr. Winkley. Perhaps they could team up to take on the project together. If they both contributed to out-of-pocket expenses, and Mr. Winkley and his crew did the repairs at cost, then perhaps they would be able to quickly turn the home around and get out whole financially. She was impressed by his accomplishments at numerous other properties in the neighborhood, knew that he was interested in preserving the character of West End homes, and knew he had won an award from the Hartford Preservation Alliance for his work. But she didn’t know if he would want to take on a project like this.

Before she could reach out to Mr. Winkley with a new proposal, though, Ms. Klein had to convince her husband, David, that they should get involved. Years ago Mr. Klein had supported her effort to help a neighbor avoid foreclosure, so it wasn’t an unprecedented request. Even so, she thought about it for a few weeks before broaching the subject. Fortunately, he was interested. Once her husband was on board, Ms. Klein again reached out to Mr. Winkley, who also saw an opportunity to do something positive for the neighborhood. He toured the home to put together a rough budget, determining that the numbers were close enough to give it a try. Within days they worked out the terms of their partnership and submitted their offer to the sellers.

Although the price had fallen to the point that other contractors were interested in the property as a flip opportunity, the Klein-Winkley offer had an acceptable price and very attractive non-monetary terms that sealed the deal. Two weeks later the team took possession of the home and began preparing for the renovations.

Stay tuned for more about the project in the coming weeks and months.

Continue on to our next installment, Preserving the Past.