Yes, we know we are dorks. You know we are dorks too and it doesn’t hurt our feelings if you call us that. And we also know that you like these data posts, so you are at least a little dorky too. Don’t worry, we won’t tell anyone…

The local MLS that we are members of has been collecting data electronically since 2000. We thought this would be a good opportunity to do a data dump and see what’s happened during the last 10 years with single family real estate sales in Hartford County.

One of us (not Amy) had the enviable task of downloading 83,605 records regarding closed single family sales in Hartford County from the period of January 1, 2001 through December 31, 2010. As always, all of the data we’ll talk about is from the CTMLS and is deemed reliable but not guaranteed.

What was the most expensive home sold (publicly) in Hartford County during the last decade? Well, that sale took place in September 2003 when Mike Tyson sold his Farmington home for $4.1 million. That house, currently owned by the rapper 50 Cent, is now listed for sale at $9.999 million.

Alright Amy, we’re not all millionaires here. How about some charts about how sales prices and sales volume changed in the county over the decade… 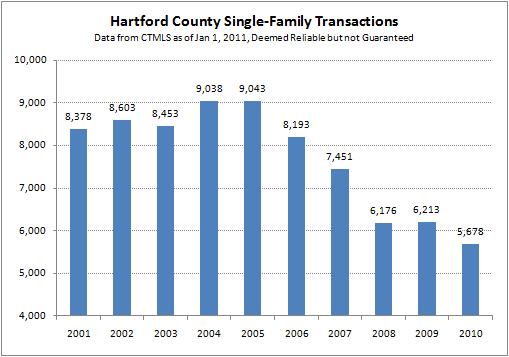 Why do prices continue to rise in 2006 and 2007 even as sales volume was already falling? We have some theories, but need to do some more research. Is it herd mentality? Was it new construction continuing to come onto the market? Do other markets (like the stock market) also exhibit this behavior?

What does this imply for buyers sitting on the sidelines waiting for the bottom? Have they missed it? Or is the price increase in 2010 attributable to mix of sales?

It seems as though people just aren’t moving as much as they used to. The recent trend of 6,000 deals per year in the County is well below the nearly 9,000 deals per year that were happening from 2001 through 2006. Maybe people used to move hither and thither for jobs, but now they don’t. That’s a lot fewer real estate deals for us agents to divide up amongst ourselves.

As often happens, we came out of this with more questions than answers. What do you guys think – any theories? Maybe we’ll follow up on some of these if we reach any conclusions.

Also, we have this data broken down by every single town in Hartford County. If you’re interested in a specific town, email us and we’ll send you the charts.

5 thoughts on “A Decade of Hartford County Real Estate Transactions”