Today we’re going to look at the Hartford County condo market for 2010. Like we’ve been doing with the single-family market, we’re going to focus on the contracts written so that we have a sense of when buyers and sellers are most active. The chart below shows the number of contracts written by month for each of the past two years, which will give a good baseline for what we will see in the coming year. 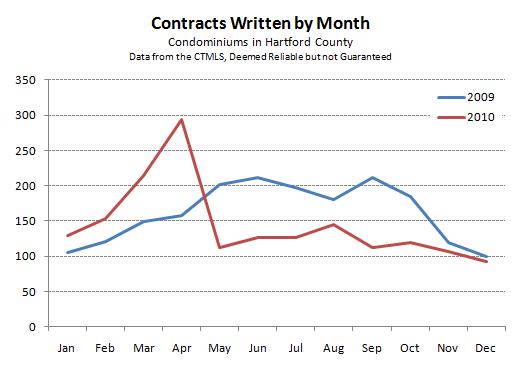 2010 got off to a quick start, with buyers out shopping early. The number of contracts written trended ahead of 2009 for the first four months, spiking in April as the Federal Home Buyer Tax Credit expired. After that, the activity level was rather low and did not exhibit the traditional market seasonality. The number of total contracts was down about 10% for the year. 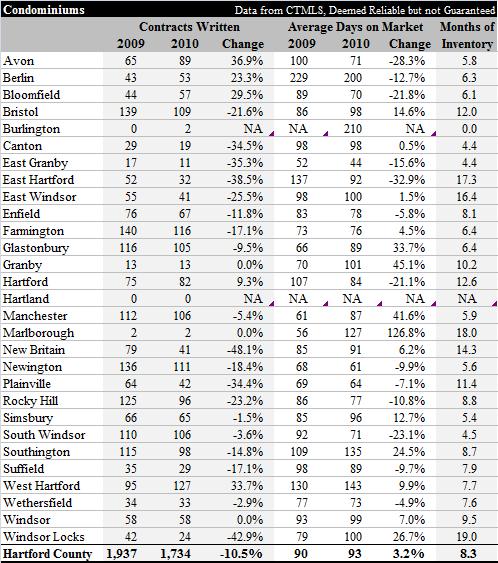 Looking at stats for the individual towns, we can see that it was a mixed bag.

Nearly all towns in the County have at least some condos, though certain towns have a much larger supply than others. This chart doesn’t show it, but the price points often vary between towns. Buyers looking at higher price points will have different towns available to them than buyers looking a lower price points, and vice versa. There are also still some new construction projects available, if that is a priority.

Although most of the towns showed a decrease in the number of contracts written for the year, the change in contract number varied widely. Five towns actually saw an increase during 2010. West Hartford jumped all the way from the eighth largest condo market in 2009 to number one in 2010 as all of the towns ahead of it experienced a slowdown in their markets.

Over the past two years it has consistently taken about 90 days to sell a condominium in Hartford County. Sellers need to be aware that the sales process could take a few months so that an extended time on market can be factored into their planning. Keep in mind that the days on market stat counts the time from when a property is listed until it goes under contract, so the seller will still own the home for another 45 to 60 days as the buyer goes through their inspections and secures their mortgage.

Condominiums are an important part of the Greater Hartford real estate market. There are not nearly as many available as single family homes, and they are distributed differently throughout the County. We’ll do regular posts tracking the condo market and see how it evolves during 2011.