For the first time since February, the number of single-family homes that went under contract dipped under 700 for a month. July saw 685 contracts come together providing our first evidence that the real estate market may actually take a breather over the summer. 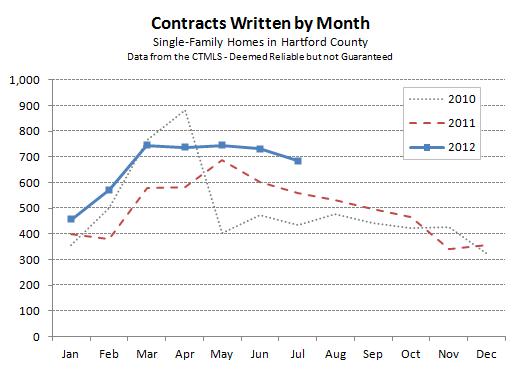 July felt surprisingly busy to us – especially the first half, which seemed like a continuation of June and the spring market. We expected the calls and emails to slow down as the month wore on. They really didn’t, aside from a few quiet days mid-month – which is a good thing for us as agents. The month was about 22% more active than July of last year, and year-to-date we are about 23% ahead of the 2011 contract pace. 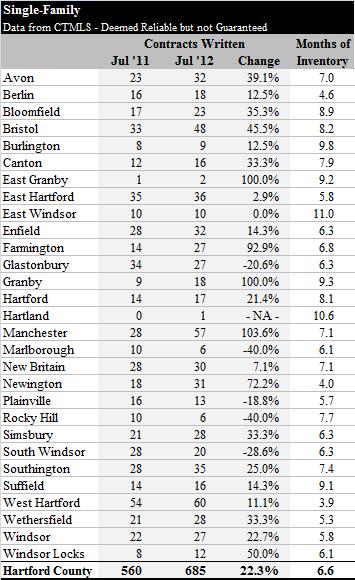 Looking at the data by town, Manchester jumps out as the most exciting place to be in July. They had double the number of contracts as last year and were quite close to being the most active town in the County for the month.

Inventory seems to be at reasonable levels for the County overall, and in most of the individual towns. Many of the rural towns at the periphery of the County and the urban towns are currently buyers markets, with more than 6 months of inventory. The suburbs in between the rural and urban seem to cluster closer to a neutral market of between 3 and 6 months of inventory.

August is traditionally one of the slowest months of the year for contracts. So looking forward, we expect to see a drop in deals for the next report. Beyond that it is difficult to predict what may happen. Fall is a popular time to shop for homes, so it’s likely we’ll see a second peak in activity before the end of 2012.