Last fall we wrote about the Historic Homes Rehabilitation Tax Credit, hoping to introduce it to our friends and neighbors. A year later we’re revisiting the subject for a variety of reasons. One is because it has come up in the WECA Architectural History and Resources Committee, and that group is looking to spread the word in any way they can. Also because people are beginning to take advantage of the program, so there’s a chance that someone you know has explored it. But most importantly, there is real money to be found here and just about every property in Hartford’s West End neighborhood qualifies. Think of it as a 30% off coupon that has a maximum value of $30,000. 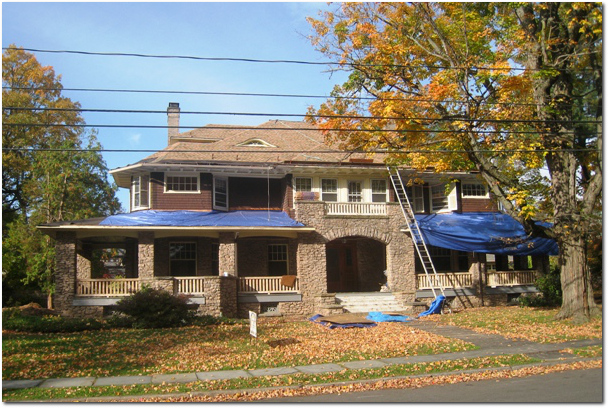 Goals and Requirements
The Historic Homes Rehabilitation Tax Credit is a state program run through the Department of Economic & Community Development. Its overall goal is to assist homeowners in maintaining and renovating properties that are both designated as historic and in targeted areas of the state.

Hartford is one of the eligible cities, and the West End is almost entirely covered by a patchwork of historic districts. Therefore, if a home contributes to its historic district (i.e. if a home is old), and is a four-family or smaller, then it qualifies for the program. Another main requirement is that the home must be owner-occupied as a primary residence for 5 years after the work is completed, though it can be with different owners.

So far, so good. Next let’s circle back to the financial considerations. Homeowners get their project reviewed and approved in advance via an application. They are free to hire any contractor they choose to do the work, and by all accounts the contractor is not impacted since the homeowner is documenting the project and keeping the records.
A single-family home can get 30% of their costs back on an application containing between $25,000 and $100,000 in budgeted work. Two important points are that the homeowner has to have the cash to pay for the whole project up front, and unrelated projects can be bundled in a single application. A multi-family home can go through this process once for each unit (up to four units in a four-family).

The next important detail is that the renovations have to be historically appropriate for the house. Most interior and exterior repairs, and mechanical system work, will qualify since that is considered maintaining a historic home. The official criteria is the Secretary of the Interior’s Standards for Rehabilitation, so homeowners planning to make modifications to their property should consult this guide, or the State Historic Preservation Office with specific questions.

It seems to us that getting to the $25,000 minimum application budget threshold will require most homeowners to bundle 2 or more projects. Just painting a house, or replacing the roof, will not be enough. But both in the same year, or a combination of other projects, will be enough to qualify.

An Application Example
Jan Klein, of Hartford, heard about the program on a few occasions before she began planning to use it herself. As Co-Chair of the WECA Architectural History & Resources Committee she had first learned about it when her committee led the effort to create the Oxford-Whitney Historic District in the neighborhood. More recently, she was reminded about the opportunity when a friend who lives in that newly formed Historic District talked about being involved in the process.

Ms. Klein’s application bundled a bathroom update with four smaller projects to reach the budget threshold. The other work was primarily dealing with lingering maintenance issues on her home that would need to be addressed sooner or later anyway. Combining them with the bathroom project did increase the budget, but it also allowed her to qualify for the 30% savings via the tax credit program.

Along the way, Ms. Klein learned that some of her smaller projects wouldn’t qualify. For example, she was not allowed to claim carpet installation because that isn’t a repair to a permanent structure. She also wasn’t allowed to include repairs to her non-historic detached garage.

The application review process was quick and painless for Ms. Klein despite the five individual projects it contained. Lucas Karmazinas, her Co-Chair of the WECA AH&R Committee and a local Architectural Historian, provided initial guidance to get her started in the right direction. And Mary Dunne, of the State Historic Preservation Office, sat with her to review and talk through the initial filing.

Though still in the middle of the program, Ms. Klein feels good about the process so far. The application imposed minimal delays on her construction schedule. She was able to hire her preferred contractors for each project. And she was able to include previously purchased bathroom lights and mirrors in the application budget. Her one remaining concern is claiming the full 30% value of the tax credit, since she has not yet submitted that part of the application.

Finally, Ms. Klein reports that based on what she has experienced so far she would go through the process again. Her one recommendation is to have contractors budget generously in their initial quote. The tax credit is limited to whichever is lower, the actual amount spent or the application budget. So pushing a contractor to bid low could backfire if they discover additional repairs are needed once the project has begun.

What Projects are You Planning?
If you are planning some work around the house that might qualify for the tax credit, and live in a historic district or home, check out the program website for more information. Hopefully it will help you both preserve your home and save money.