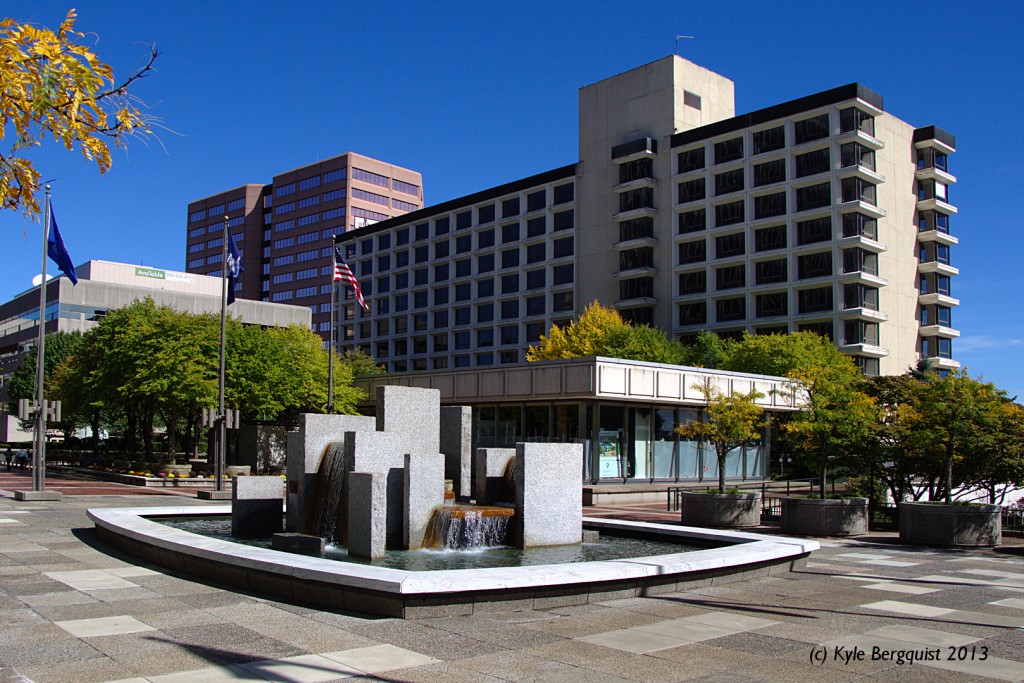 Constitution Plaza is one of the centers of redevelopment in Downtown Hartford. A number of projects have been on the drawing board for years, and recently there seems to be signs that they will begin moving forward.

The former hotel in the back right of the photo is slated to become apartments. Ken Gosselin, author of the Courant’s CT Property Line blog recently wrote about his encounter with the developer at the site after noticing new fencing.

The former restaurant just behind the fountain in the photo is in the process of becoming a TV studio for a new sports network specializing in golf. The Hartford Business Journal published a piece about the status of Back9Network in April 2013 as they continued to build their brand.

The CT River Plaza office building in the back left of the photo, along with its companion hidden behind the hotel, have been bought by the State for office space (Note: CT River Plaza is not technically part of Constitution Plaza, but the two are connected by a pedestrian bridge). Ken Gosselin reported on the State’s plan to renovate the buildings and have workers on site by 2016.

Out of the frame to the right is the former site of the Broadcast House, for which a new apartment tower is proposed. Greg Bordonaro of The Hartford Business Journal covered the announcement about a year ago.

The building at the far left of the photo is another candidate for redevelopment, as you can see from the green banner at the top. It was evaluated early on in the UConn discussion, but they eventually selected the Times building on Prospect Street.

There is a lot of chatter around Hartford’s Constitution Plaza right now. If these projects are completed, then the space is going to be transformed into a very different environment. The photo at the top was taken in the mid-afternoon on a weekday. It’s safe to say that there will be dramatically more life on the Plaza with hundreds of new apartments and thousands of State workers. Fingers crossed that the different plans work out…

2 thoughts on “Positive Developments on the Plaza”