There have been rumors that portions of Bishops Corner will be redeveloped in the future, ala Blue Back Square.

Tonight the Bishops Corner Neighborhood Group held an informational meeting to talk about potential redevelopment of another parcel in the area, 2558 Albany Avenue, seen below. 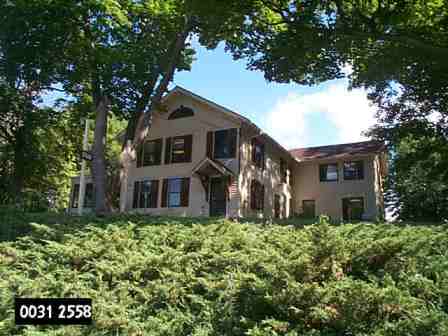 2558 Albany has been commercial space for approximately the last 30 years and is currently used as office space. The existing property poses some difficulties, as access to the parcel is limited by entrance and egress heading West only. Additionally, the building was originally a farmhouse and the redevelopment of the existing building wouldn’t be the highest and best use.

Prospect Enterprises is proposing razing the existing structure, regrading the property to reduce the grade to be more compatible with what currently exists in the area, and building a new structure on the existing site. Here’s a picture of an initial concept…

The footprint of the structure would be approximately 5,000 square feet, for a total of 10,000 square feet divided between two floors. The external style of the building would be a New England shingle style architecture, which would help it blend with the neighborhood, as it is in a transition zone near residences.

In the design, Prospect Enterprises is very concerned about the impact on residential neighbors. They are also looking into the possibility of LEED certification to formally recognize energy efficiency which would take into account building materials, using passive solar for energy, and a zero lumens border in order to reduce light pollution. 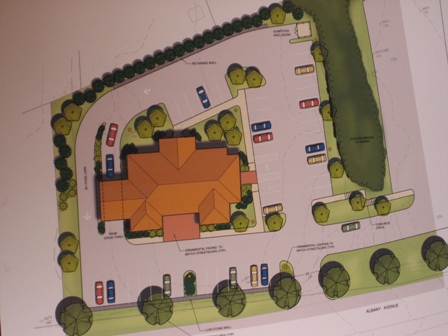 At this point, the proposed tenants for the building would be a bank on the first floor and medical offices on the second floor. Mr. Nanni indicated that there may be minor changes to the tenant proposal, but that economic demand for medical offices makes it a very viable possibility.

1. This is all in the preliminary phases at this point. There have been informal meetings only. A formal application may be made later this spring or in the early summer.

2. The Historic District Commission has already been consulted and is willing to consider the removal of the existing building.

3. There will be a cross connection to the Staples parking lot in order to facilitate entrance and exit from the East on Albany Ave.

4. Mr. Nanni indicated that Edens & Avant have been tight lipped about their development project and he has no visibility into what they are planning on the opposite corner at Bishops Corner.

It was nice to see a developer that seemed genuinely concerned about his developments’ impact on the area residents.

I’ll keep an eye out for updates on this project and other happenings in the Bishops Corner area. Many West Hartford residents (and Town Council members) want to know what’s going on, but there is currently a lack of public information available.