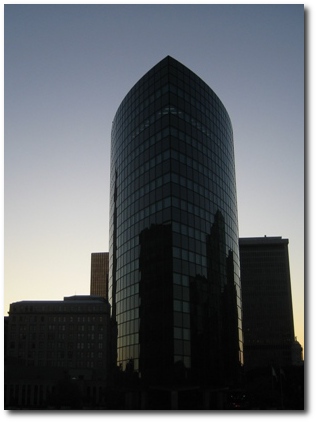 Yesterday was the first session in a five-part series on public housing policy. Housing: The Hub of Public Policy 2010 is presented by The Connecticut Housing Finance Authority, The Connecticut Department of Economic and Community Development, and The Partnership for Strong Communities; it is hosted by The Lyceum. The pre-event briefing memo touched on many issues and gave examples of what is happening in other parts of the country – it’s an interesting read. We learned about the event through our involvement in HYPE, and stopped by to check it out.

One of the recurring themes of the discussion was Connecticut’s difficulty in retaining our young adults, which is reported regularly via both official statistics and anecdotal experiences. It is a source of concern because of the ratio of workers to retirees in the state – currently 4.5:1 and expected to fall to 2.6:1 by 2030. The baseline assumption for the group was that housing played a critical role in the flight of the youth; our graduates move to other states because they can’t find affordable housing in Connecticut.

We have lived in three different states as working adults, with each move motivated by a specific opportunity. We moved to Boston because of a job, to Charlottesville because of a school, and then to Hartford because of a job. Housing costs only entered the discussion during our most recent move, as we were interested in understanding the cost of living relative to the available salaries. Hartford was more affordable that both Boston and Vermont, the other destinations we considered. So housing was a consideration for us, but it was a secondary factor after the available opportunities, and only became a factor because we expected to be in the area for a long time building a career.

Three other points that were raised during the discussion:
1. Housing costs can influence employment opportunities since companies have an incentive to locate their facilities in low-cost areas.
2. Because Connecticut is so geographically small, and located between Boston and New York, our young adults are often still close to home even if they live in another state.
3. Perhaps many of our young adults will return to the state when they are ready for a more suburban lifestyle.

What’s your take? How important are housing costs to the young adults that you know? What motivates them (you) to choose Connecticut or to choose other parts of the country/world? If you know people who have left the area, what might have kept them here if it had been available?