The cover story of today’s real estate section features an article titled That Empty Feeling about the impact of vacant homes on a neighborhood. The wide-ranging piece provides a lot of interesting and important information about homes that are considered eyesores. 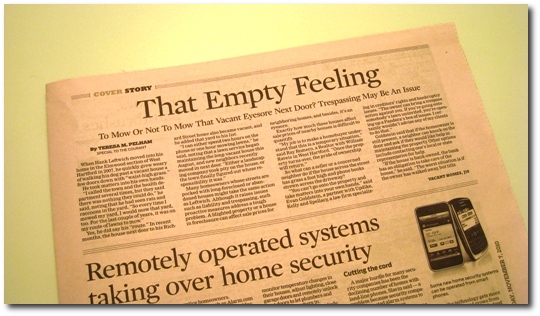 A critical point in the overall thesis, and therefore a focal point of the article, is the example of a dilapidated property that actually hurts the value of neighboring homes. Unfortunately, a very poor example was selected. As agents familiar with the property and the neighborhood in question, we feel the example actually works against the overall angle of the story.

The author quoted a real estate agent about a bank owned home in Hartford’s West End. The agent asserts that the home “significantly and negatively impacts a West End homeowner’s ability to sell.” As evidence, the agent “points to 13 properties in the West End neighborhood listed above $300,000 that have been removed from the market or have had contracts expire since January 2009.”

We have a number of concerns about three short paragraphs in an otherwise well-done article.

We don’t believe that the highlighted property’s exterior appearance rises to the level of “eyesore.” Although the assertion that the “landscaping has not been maintained” is factually correct, the lot is very different than the yards with long grass discussed elsewhere in the article. This property is set quite close to the street for a larger home and has far more plantings than grassy areas in the front yard. Most of the landscaping is hidden behind a brick wall, meaning that it is not visible from the street. Is there neglect? Sure, but the home isn’t sitting in what looks like a hay field. And as a brick building with a slate roof, the neglect has had relatively little impact on the overall exterior appearance.

We don’t believe that the highlighted property has scared off buyers. The house in question is on a short street that constitutes its own little neighborhood with only 18 homes. Three of the homes sold this year, so clearly those buyers were not deterred. One could argue that the bank-owned home pushed the price down on the other homes on the street. However, our experience as active agents in the neighborhood is that prices have fallen equally for all homes in that price range, even those without nearby distress. After little activity in 2009, there has been a much more interest in high-end homes in the West End during 2010.

The assertion that 13 homes priced above $300,000 have come off the market without selling is inaccurate and misleading. The inaccurate portion of the statement is that the correct number is 13. In fact, there have been more than 13 single-family homes priced above $300,000 that have not sold. The number increases when multi-family properties and condominiums are also considered. The misleading portion of the statement is the implications that these failed sales are related to vacant homes. Some of the sellers received offers that they chose not to accept. Others changed their minds about moving because of their personal or professional situations. Still others were simply unrealistic about the value of their home. We cannot think of a single West End property that was unsellable due to a poorly maintained neighboring property. Yet we can think of multiple examples of homes that sold despite the neighboring home needing significant maintenance.

It’s unfortunate that the author did not confirm these West End facts with an agent active in the neighborhood. Especially since there are plenty of agents with West End experience that would be happy to contribute to an article. The last time we counted, there were 18 real estate agents that lived in the (small) neighborhood, many of whom are very successful and are regularly quoted in the Courant. There are also plenty of agents who do multiple deals a year in the West End though they live in other areas.

We felt the need to speak out because the article makes the West End the face of neglected properties. Although it’s true that home values have fallen in the West End, and properties have come off the market without selling, these things have been happening elsewhere in Greater Hartford too. Since real estate values fall for a variety of reasons, suggesting that one bank-owned home is causing buyers to avoid the entire neighborhood (the 13 listings removed from the market) is overly simplistic. It may tie the story together, but it’s just not true.

Similarly, one poorly researched section does not negate all the value of this interesting article. We would definitely recommend reading it – just take the portion about the West End property with a grain of salt.