Here’s a quick look at how the Hartford County real estate markets performed last month. Closings in October reflect deals negotiated during the summer and fall depending on the amount of time between the contract date and the closing date. The data comes from the Connecticut Multiple Listing Service (CTMLS), which is deemed reliable but not guaranteed. 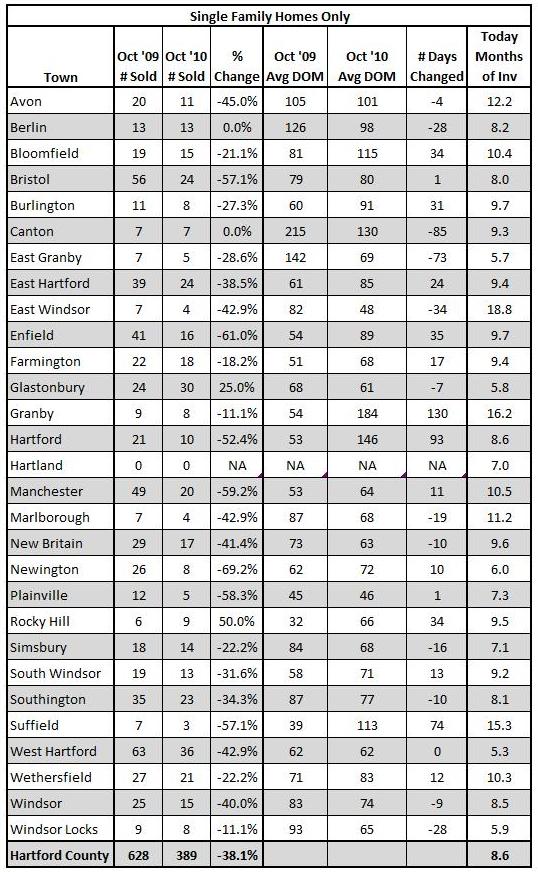 There was a wide range in the percent change in number of transactions for this October versus last October. Most towns were considerably less active, though there were some positive towns. Glastonbury had 25% more sales than last year (6 deals), while Rocky Hill saw 3 more deals close for a 50% gain. At the other end of the spectrum there were 7 towns in which the number of deals fell by more than 50%. Hartford County overall saw a 38% decrease in the number of transactions for October 2010 versus October 2009.

Part of the reason for the drop in activity was the Federal Home Buyer Tax Credit. Last fall there was a version of the credit scheduled to expire at the end of November, before the program was extended for the final time. Many buyers planning to take advantage of the credit scheduled their closings for October and early November, so the activity this year should be less.

Buyers should have some very good choices in the market, as inventory levels show a buyer’s market for nearly all the towns in the County. The standard benchmark for a buyer’s market is when there is 6 months or more of inventory available. Based on recent activity, only four towns are NOT in a buyer’s market. West Hartford has the least inventory, at 5.3 months, while the other three are each much closer to the 6 month dividing line.

Sellers need to be willing to price their homes attractively if they really want to sell – this isn’t the time to stretch for that extra few thousand dollars. Buyers do have a lot to choose from and seem comfortable taking their time to make a decision. Sellers need to give them a reason to pull the trigger. Make sure the property shows as well as possible and consider touching up any problem areas before putting it on the market.

One thought on “October 2010 Market Statistics”