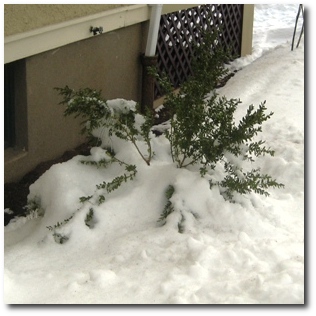 The crushing weight of this winter’s heavy snowfall is taking a heavy toll on area landscaping. After initially focusing on the potential damage to our own shrubs, I’ve begun to notice that others are experiencing similar problems. The subject even came up (unprovoked) at a recent dinner party we attended.

Here at Casa Bergqui, the primary issue is snow and ice cascading off the roof and onto the shrubbery along the front of the house. We have attempted to shovel out the plants to relieve some of the weight, but in retrospect that may have just set them up for another direct hit in the next blizzard. When the shrubs were brand new, we had deployed wooden A-frames over the top of the young plants to protect them from the dangers above. Two seasons of below average snowfall, and my concern about their lack of winter sun, gave me the confidence to skip that step last winter. It worked out well last year … not so much this year. 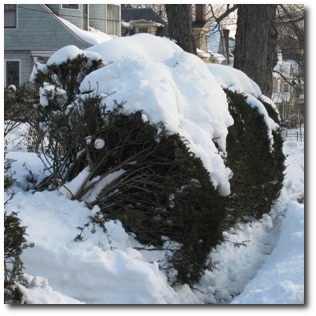 Other homes in the neighborhood have mature hedges at the front of their properties. Some species seem to be fighting off the snow quite well, while others appear to be struggling. Hopefully the damage looks worse than it really is because they will be very difficult to repair. I imagine it would take years to regrow a particular section to match the rest of the hedge.

This spring looks to be shaping up to be a very profitable time to be in the landscaping business. The damage caused by the snow and ice this winter will create lots of demand for new plants and services. And with the economy no longer completely in the toilet perhaps homeowners will be more inclined to spend on these sorts of non-essential items.

I wonder if it’s possible to corner the market on boxwood in order to profit on the coming landscaping boom?