One of our roles, as a real estate agents representing sellers, is to act as an informal promoter for the various towns and neighborhoods in which our clients live. Potential buyers from other parts of Greater Hartford, or even other parts of the country, may not know what an area is actually like. They may have never visited, and they may have formed their own mental images based on what they’ve heard from other people. Sometimes they’re basically right. More often they’re completely off base. 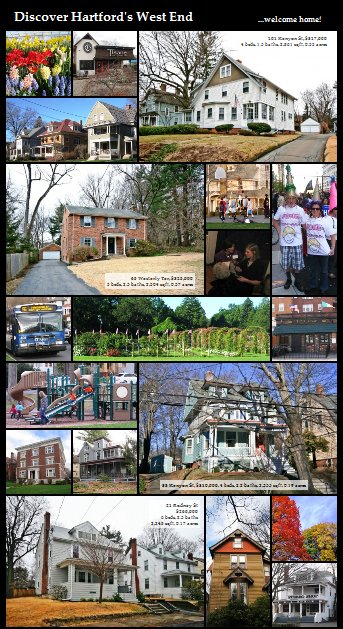 In our auto-centric culture, it’s very easy to zoom right past the West End without even realizing it’s there. And it’s also very easy to gather opinions about the City of Hartford, in which the neighborhood is located. The constant conversation about Hartford in the media, and in the workplace, makes people feel confidant that they understand the City … that they get it.

But do they really “get it?” I find that perceptions about Hartford’s West End neighborhood are often quite different from the reality. My solution – pictures! Lots and lots of pictures. If people don’t have time to visit the West End, then let’s bring the West End to them.

The page that follows is a photo mosaic of pictures all taken in the West End. It’s just my initial version, and will continue to evolve as I take more and more pictures of the neighborhood and what goes on in it. As a real estate website, there’s an obvious focus on houses, including the ones for sale. I think this is appropriate since the West End has some of the most architecturally interesting homes in the region, most built between 1890 and 1930. Hopefully the pictures also show that it’s a true mixed-use community with terrific restaurants and a world-renowned park all within walking distance.

Please consider passing this link along to family, friends, co-workers, and anyone else you think might appreciate this sort of community. Who knows, maybe they’ll be inspired to visit, and decide the West End would be a nice place to call home. Thanks!