Hartford County finished May of 2014 with 907 single-family contracts, a late spring spike in activity after a slow start to the year. 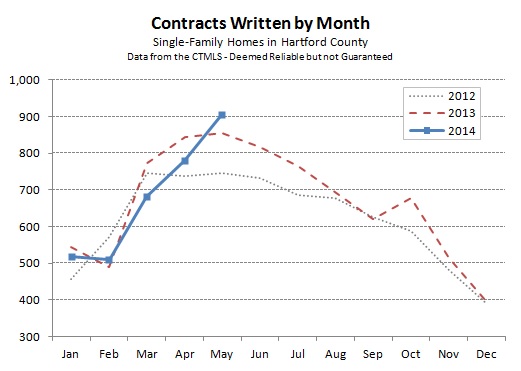 The 907 May total is a 6% increase over the count in May of 2013. It also begins to close the year-to-date gap that had build up over the first four months of the year, leaving us only 3% behind through May. This month’s total is also the highest count for an individual month that we have recorded since we began using this methodology for analyzing contracts in 2011.

Our markets definitely felt more active in May than they did in April, so it’s nice to see the data backed up our observations. We’re very curious to see where the market goes from here. April and May are traditionally the spring market peak, with activity beginning to fall off in June. Perhaps this year the two most active months will be May and June?

Inventory levels are continuing to build. The number of available homes has been consistently rising since we reported 4.5 months of inventory in February. We’re now up to 6.1 months, and by our count there were exactly 1,000 additional homes for sale on June 3rd versus March 3rd – 4,024 versus 3,024.