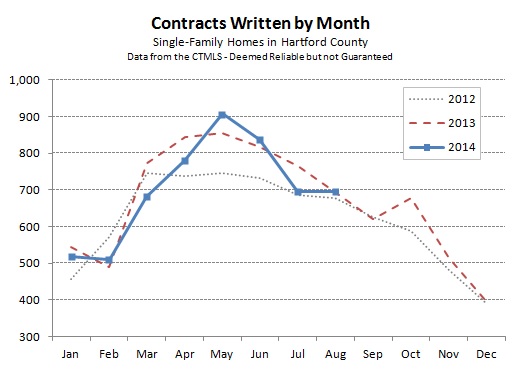 The August real estate market showed an unusual level of activity. At 696 contracts, it wasn’t the most active month of the year, and in fact it merely tied the final tally for July. But it was still a busy month, and exciting for the market.

Looking ahead, August is traditionally more about vacations and back-to-school preparations than about real estate, making it a difficult data point to interpret. Historically there are almost always fewer deals in August than July, so the question is more about the magnitude of the drop than whether there is a drop.

Well, we were wrong about what would happen in August, and we’re fine with that. It was a good month for the Hartford County single-family home market in a year that has been inconsistent and unsettled. The August result makes it basically impossible to predict the remainder of the year with any confidence. Looking at the top chart, was July the outlier or was August?

It could be fun to make up an explanation to fit the facts. Bad analysis, but fun anyway – let’s do it!

Okay, was there something that happened in July that caused buyers to take some time off from their search? it can’t be something that ended badly since buyers appear to have only delayed their search rather than dropping out of the market altogether. Got it … this is the World Cup effect! Clearly buyers were distracted by the dramatic knock-out rounds of the tournament, which began on June 28th and continued until the finals on July 13th.

But seriously, back to reality. Inventory levels ticked up since last month, and we’re starting to see new fall listings come on the market as we pass through the very early Labor Day weekend. We’re optimistic that the remainder of the year will be a good one for the markets, but have to wait and see just like everyone else. 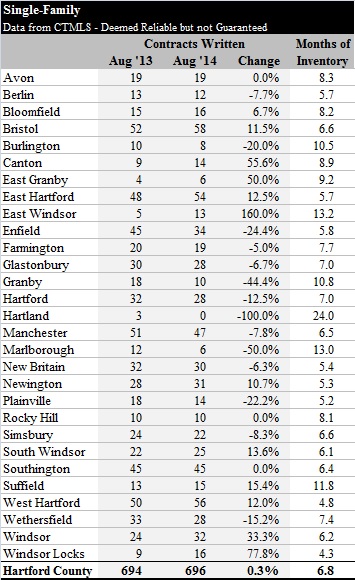