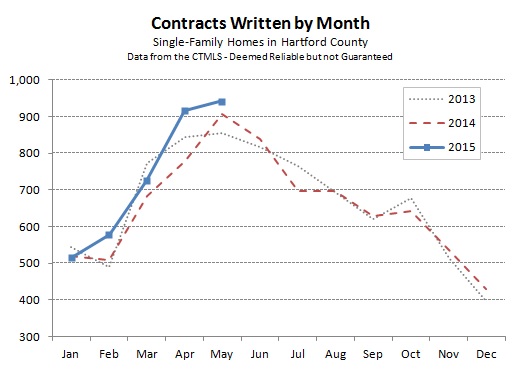 Hartford County finished May with 943 single-family home deals coming together. The month was 4% more active than May of 2014, and it took over from April of this year as the most active month since we began tracking contract data in 2009.

May is traditionally the peak month for contracts in the cyclical real estate market, so we expect that the sales pace will begin to slow as we enter the summer months.

Not all the towns in Hartford County were moving full speed ahead in May. In fact, four towns had noticeably fewer deals than than their comparison month of May 2014. Enfield, Hartford, Southington, and West Hartford all showed at least 10 fewer deals than the previous year.

On the other hand, four other towns significantly outperformed their May 2014 comparison month. East Hartford, Glastonbury, Manchester, and South Windsor all reported at least 10 more deals than the previous years. Other towns with smaller real estate markets actually showed greater improvement when looking at the percent change.

Inventory increased to 6 months worth of homes on the market, up from 5.2 in the April report. This suggests that the pace of new listings was even greater than the pace of buyers and sellers agreeing to contracts. The MLS shows 1,626 Hartford County single-family properties with a May listing date. As a point of comparison, there are a total of 4,105 active listings. 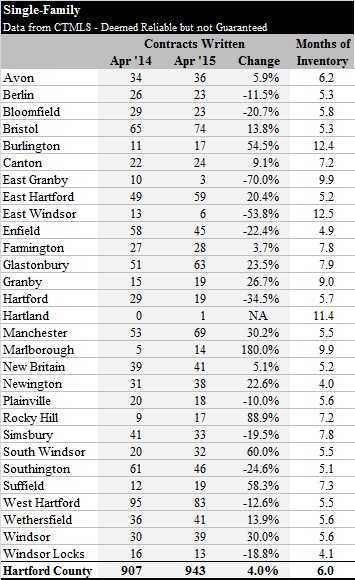