Not everything in a historic home is worth saving. Consider the furnace. Does anyone want to live in a house with a 105 year old furnace? Especially if it was completely preserved in original condition? It’s possible that someone might, but most buyers and homeowners would prefer to have a modern furnace generating their heat. Not only is it more efficient, it’s also safer. 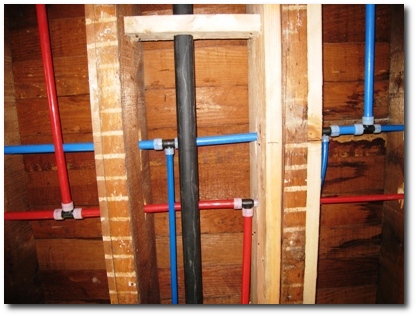 The West End Home is in the process of receiving new mechanical systems – almost all of them will be replaced. Mr. Winkley, of Oxford Builders, noted that taking the interior down to the studs made updating the mechanicals much easier. The specialists from each trade are able to install brand new infrastructure without worrying about gaining access to the inside of walls or tying into older systems.

When the project began, the plumbing had examples of best practices from all of the eras since 1905. It was still in working order, but was not positioning the home well for the next 100 years. Mr. Winkley removed all the plumbing, installing a Pex system for hot and cold water delivery and new PVC piping for waste water removal.

The electrical system also featured a variety of styles from the long history of the house. It received a major upgrade to modern electrical code. 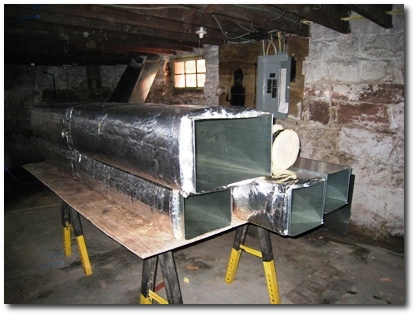 However, the heating system received the most significant upgrade. The home was originally built with forced air heat, making it possible to add air conditioning by utilizing the same ducts as the heat. In addition, Mr. Winkley was able to make each of the three floors a separate heating/cooling zone. The new high efficiency furnace and central air conditioning unit should help keep energy costs at a reasonable level.

Despite the overall focus on preserving the history of the West End Home, not everything is worth saving. Replacing the mechanical systems will make the home safer and reduce the likelihood of expensive repairs in the future.

Saving a West End Home is a collaborative effort of the Klein and Winkley families, who are both West End residents. Look for additional updates in the coming weeks and months

Continue on to our next installment, Living History.