The number of condominiums that went under contract in Hartford County this January trailed 2010’s total by just over 20%. The drop in activity continues the post tax credit trend from last year. Since this month’s deal count was actually in line with the January 2009 numbers, it appears that the market is simply returning to a more realistic activity level after being goosed by last year’s tax credit. 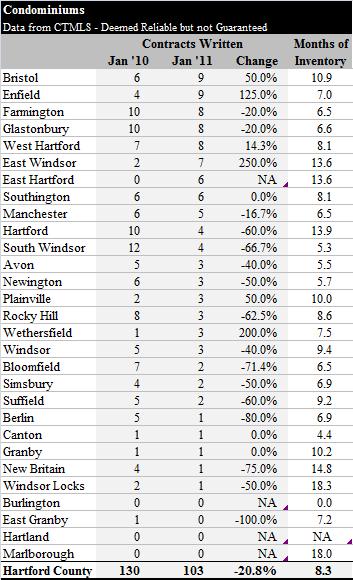 Buyers and sellers successfully negotiated contracts on 103 Hartford County condominiums in January. The table shows the results by town, and sorts it based on the number of deals. There are some surprising results in the data, both in terms of the number of sales and the change from last year.

Some towns have more condos than others – it’s just the way the housing stock was built in those areas. What’s interesting about the January result is that some of the towns with the most condos had relatively few deals. South Windsor has numerous condo complexes and is routinely at the top of the list in terms of the number of deals. This month they only had 4, which was well off last year’s count of 12. Rocky Hill is another town with an active condo market that got off to a slow start.

The other important stat is inventory. We ran the calculation using the current number of listings and the total number of contracts over the past 12 months. This is how we always do it so that we can minimize the impact of seasonality. Since we believe that the number of deals last year is artificially high (because of the tax credit), then that’s going to make the inventory look lower than it really is. Inventory is also often at a seasonal low in January. The spring market hasn’t quite kicked in, and sellers have not yet listed their properties.

With those two points in mind, the current inventory is concerning. The County is going into the spring with more than 8 months of inventory, which is already well into “Buyer’s Market” territory (more than 6 months). We’ll keep a close eye on this in the coming months and expect a large jump in the calculation in May once the tax credit deals are more than 12 months in the past.