Most of our ongoing analysis of the real estate market is focused on contract data. We like to track contract data because it represents an important milestone, it is more immediate than closings, and it is a strong predictor of closings. But at the end of the year it is also interesting to take a look at the closing numbers since those data points have a meaningful price associated with them. 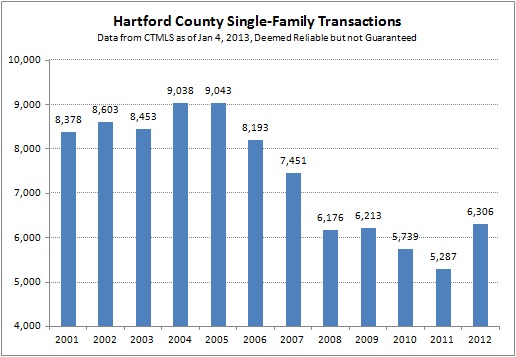 In 2012 the number of single-family transactions in Hartford County increased by 19.3% over the previous year. This was the first meaningful increase in the number of deals since the peak of activity in 2005. At this point we are at about 30% below the 2005 number. 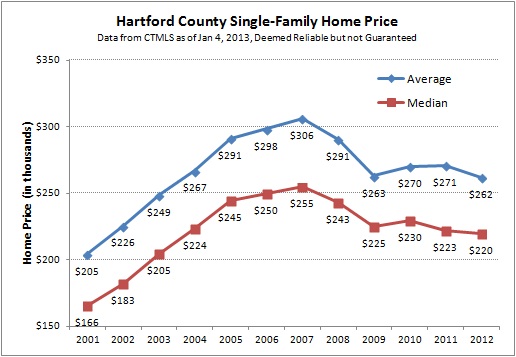 Prices were down from the previous year both when looking at the average and median sales price. Since the dramatic fall from the peak at 2007 to the initial bottom in 2009, prices have been bouncing around the 2004 level. 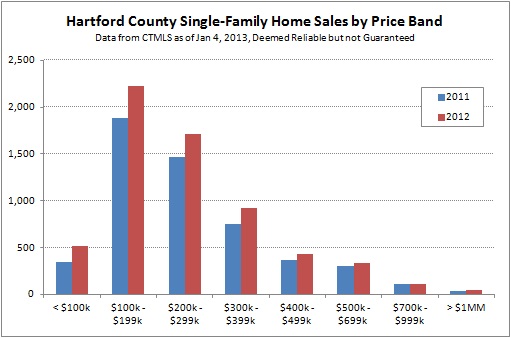 Breaking the sales data down by price band, we can see that the increase in activity was spread across nearly the entire range of price points. The exception was the $700,000 to $1,000,000 band, which saw a slight decrease in the number of sales. The change in the sales mix contributed to the decrease in average and median prices but we can’t quantify how much of an impact it had versus prices actually falling.

Have we passed the bottom of the market and made it to the upswing?

Activity is certainly rising, and we have already seen increasing prices in some of the more active towns in the County. Right now the main drag on activity is the lack of interesting homes for sale. Buyers in some towns are anxiously waiting for new (high quality) listings. Just this week a property was listed in West Hartford that received 5 offers on the first day, with the highest being about 5% over asking price – and everyone who was interested in the home hadn’t even seen it yet. Very exciting for that seller!