September contract data for Hartford County single-family home sales showed a decrease in activity on both a month-over-month basis and a year-over-year basis. 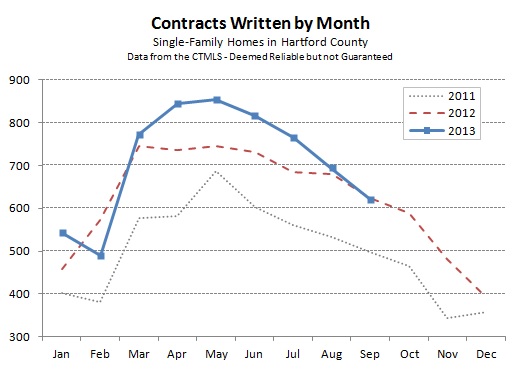 The final count was 620 contracts for September, which was slightly behind the 625 from September 2012. We were very surprised by how the month developed. After a flurry of activity at the end of August and the beginning of September, we were expecting a strong month and a step up in the number of contracts – a “fall market” rebound in the deal count. 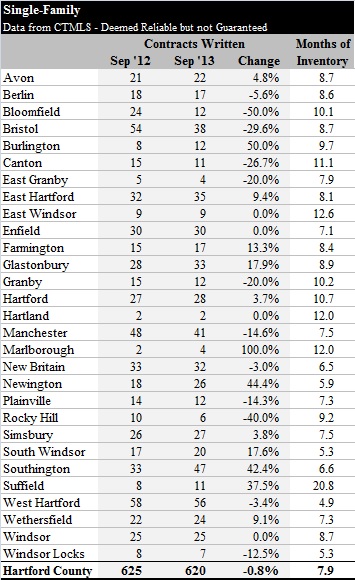 As the weeks passed it became clear that the activity level was not being sustained. Why did the market die out for a couple weeks? It got pretty quiet there in the middle of the month. And, given our observations about the slowdown, what does it tell us about the market moving forward?

We’re not sure why the market slowed, and struggle to even come up with a hypothesis. The only noteworthy change was that a brokerage with a strong Greater Hartford presence completely changed their brand. That process seemed to go smoothly, so it’s difficult to imagine it influenced the market. However, a lot of individual agents had to spend time communicating the new brand to their clients and changing over their personal systems, so it is possible that it had a small market impact.

The inventory of homes available jumped meaningfully between the August and September reports. We are now at 7.9 months of inventory for the county overall, with much higher levels in some towns. Even the towns that had the most favorable conditions for sellers (low inventory) through the spring and summer months are seeing more listings and the market creep back up into neutral territory.

Taking a step back, we’re not sure what to expect for the rest of the year. The government shutdown is now a week old, and may begin impacting deals if it continues for too much longer. We’re just going to have to take it week by week until some of the uncertainty is resolved.