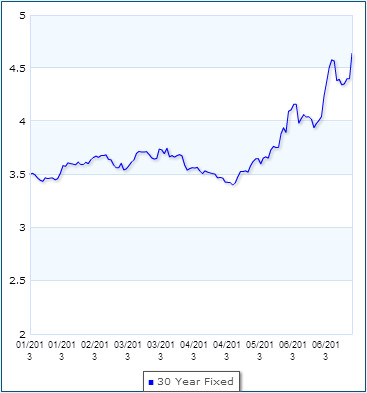 As those actively looking for a home can tell you, mortgage rates have risen sharply in the past two months. The chart to the right shows the average rate for a 30-year fixed-rate loan since the beginning of the year. The chart is from the Bankrate.com site.

From January through the beginning of May, mortgage interest rates bounced around the 3.5% level. But then, over the course of a little more than a month they increased to over 4.5%.

Buyers have been impacted by the change in a few different ways. Some chose not to lock their rate when they got a home under contract in the spring market, which unfortunately didn’t work out well for them. Others were surprised to be impacted. I know of one case where the buyer’s rate lock lapsed when a closing was delayed and their rate adjusted upwards by a meaningful amount, which also forced them to accept a 3 day waiting period associated with the lender’s required disclosures.

But taking a step back, what should buyers think about rates at 4.5%? The reality of the situation is that from a historical perspective mortgage rates are still very attractive. Have a look at this chart, which is based on National Average Contract Mortgage Rate data since January 1990 from the mortgage-x.com site. 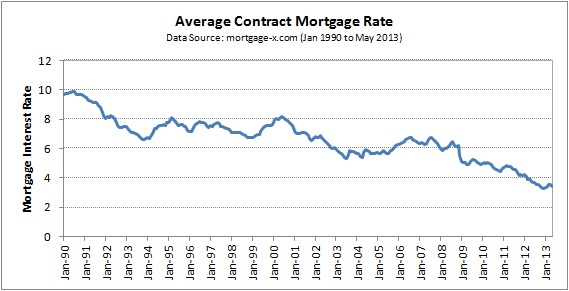 This chart ends with the May 2013 data point, so it doesn’t show the recent uptick. But still … 4.5% is lower than everything on this chart before the fourth quarter of 2010.

Another way to look at this is by quantifying the impact of the rate increase. Consider a $300,000 home that someone is buying with a 30-year loan and 10% down. Seeing the rate jump from 3.5% to 4.5% causes the monthly principal and interest payment to increase by $156 from $1,212 to $1,368. $156 per month is $1,868 per year, which does not radically change a buyer’s financial equation, but is not an insignificant amount of money either.

The big question about the current interest rate trend is this – how will the real estate market be impacted? Rising rates reduce a buyer’s purchasing power – will this scare some buyers away and force others to reduce their offers? Or will fear of rates rising even higher force buyers off the fence and actually increase demand for real estate?

Bill McBride, author of an economics site called Calculated Risk, has written about the relationship between housing prices and mortgage rates a couple times. In his first piece he noted that the negative impact of rising interest rated is overshadowed by other factors, like the positive impact of a strengthening economy. Most recently he looked at example time periods when the economy was growing at the same time mortgage rates were rising. He found this supported his conclusion that rising rates may slow price gains, but are unlikely to cause home prices to fall.

If you are considering a home purchase, how are you thinking about the rising mortgage rates?

One thought on “Rising Mortgage Rates”