A small crowd gathered near the trash and recycle bins of a pale yellow home on the corner of Whitney and Fern. Saturday at high noon is traditionally the time of reckoning for properties subject to foreclosure auctions, and the appointed hour grew near.

The group that was forming was an eclectic bunch. Investors walked with purpose as they evaluated the outside of the property, measuring the opportunity. They paced back and forth on the sidewalk, consulting via phone with business partners, contractors and any other experts they trusted to get a solid sense of what the building was worth to them. 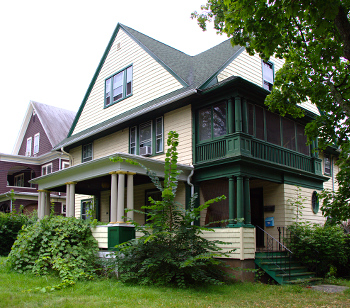 Neighbors wandered in and out of the scene, at a more leisurely pace, trying to learn about a difficult situation that they had been monitoring for months. Those who wanted to take a look inside waited at an entrance for a guided tour one at a time. As the auction approached, it appeared that there were about fifteen groups in attendance.

The focus of everyone’s attention was a multi-family home a couple blocks from the UConn Law School. It was surrounded by more multi-family than single-family structures, but the immediate vicinity is a nice mixture of both residential uses. This particular building is currently configured as three apartments, with one on each level. As a corner lot, it has two sides facing a street, and is actually numbered with two separate addresses. There is a detached two car garage and a generous parking area that is a mix of pavement, former pavement and grass.

The outside of the home wasn’t much to look at. Grass and weeds stood more than a foot high in places, and the larger landscaping features were equally out of control. Sporadic exterior maintenance of the home created strange juxtapositions. An almost new green shingle roof adjacent to meaningful deterioration of the paint. A completely rebuilt front porch being taken over by aggressive vine-like plants

Despite the poor presentation, the home had many positives. The interior unit that we were able to tour was spacious and in good condition. We were told that the other main unit had a similar layout. The home had natural woodwork and high ceilings. Buildings from the early 1900s were well built, and the quality craftsmanship was still visible throughout the property.

The auctioneer called the proceedings to order and explained how the auction would be run. Nine bidders had formally registered and were issued bidder identification numbers. The bank holding the mortgage started things off with an opening bid of less than $175,000. It seemed very likely that someone would offer more than that.

Bidding started slowly. The auctioneer always started by asking for $5,000 increases over the previous high. If nobody offered, he then opened it up to bids in any amount. The high offer rose in an erratic manner; $1,000 at a time for the most part, but with smaller increments mixed in and the occasional $5,000 jump. Four bidders were involved in the action early on, but as the price rose over the $200,000 mark it became a back and forth between two bidders.

While the auction was taking place, all eyes were on the action. Drivers passing by in the street stopped in the driving lane and leaned out their window to hear what was going on. The owner who was having the property taken away from him arrived midway through the auction and sat in his car in the driveway taking in the scene.

The current tenants, reluctant participants in the entire spectacle, watched the proceedings together from one of the porches. Not only did they have to deal with the auction and accompanying events, but they also were not sure whether they would be allowed to stay in their apartments after the sale since they were renting on a month-to-month basis. One had been researching tenant rights and believed that they would either get to stay as tenants for the new owner, or be offered an incentive to leave in compliance with the State’s “Cash for Keys” program. The challenge was the uncertainty of it all, waiting to learn the new owner’s intentions for the property.

When auctioneer finally yelled “Sold!,” the high bid stood at $230,000. The winner seemed pleased with the purchase and joined the auctioneer up front to hand over a bank check for the deposit and finalize the paperwork. The sign posted on the property announcing the auction stated that the balance of the funds must be paid within 30 days of the sale being approved by the bankruptcy court.

Just like that, a new owner was in line to take over the home. Sadly, this building is not the only one in distress in the neighborhood. They are sold in different ways, some more visible than others. Hopefully each will end up in the hands of new owners who will become contributing members of the West End community.