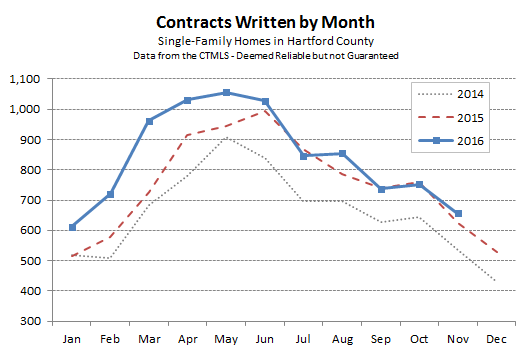 As a County that voted for Ms. Clinton by a sizable margin (58% to 31%), the election of Mr. Trump could have been disruptive to the local real estate markets. We’ve been told in the past that real estate activity slows down in the final months of presidential campaigns. A natural extension of this hypothesis is that an unexpected loss by the County’s preferred candidate should also be seen in the sales activity data.

The second half of 2016 was not as active as the first half of the year. However, it is unclear if the slowing pace of deals can be attributed to the election. There was not a precipitous drop in activity at any point as voting day neared. Month-by-month results closely follow last year, which was not an election year. If anything, the consistency in the month deal counts suggests that home buyers didn’t feel the presidential election impacted their real estate activities.

It is so close to the end of the year that we’ll save the detailed data analysis for the year end report. The high level results clearly show that it was a good year for the local real estate markets. 2016 will finish with more sales than 2015.