February just ended so itâ€™s time for some more real estate statistics for the Greater Hartford area. As always, data comes from the CT Multiple Listing Service, is deemed reliable but not guaranteed, and is for single family homes only. My analysis follows after the chartâ€¦ 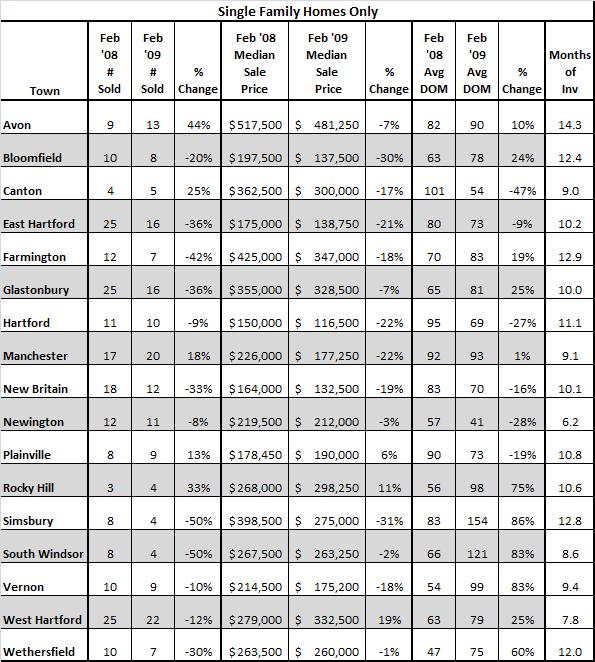 1. Just like January, there were so few transactions in some of the towns that this data is not very statistically relevant, particularly the Median Sale Price and Days on Market columns. I am simply including these two columns because Iâ€™ve done so in the past and people like to see the data. Those two buckets are much more relevant on a quarterly basis, so just keep that in mind. Next month I’ll do quarterly numbers after March closes, so that will give us a better look at a more meaningful dataset.

3. Every town in this analysis is now seen as a Buyer’s market, with more than 6 months of inventory available in each town. Remember, certain price points and neighborhoods may still have an advantage to Sellers, but when aggregating all price points and neighborhoods for a town, each is showing an advantage to Buyers right now. This is common for the early spring market, as Sellers are starting to list their homes at a brisker pace than they would during the winter months and the majority of Buyers in our market are not out in “hunt” mode until April or May. I would expect the inventory numbers to come down a bit in all of the towns in the next two months.