The West End Home has a round turret as its front, left corner. Although round turrets are not uncommon in the neighborhood, the feature gives the property a little something extra – something special.

From the outside, the conical roofline immediately draws the eye. For me, the effect is to mask the true size of the building. It makes the home feel more intimate and cozy than others in the neighborhood that have larger facades facing the street. Even though the main portion of the roof continues higher – allowing finished living space on the third floor – the pointy hat on top of the turret somehow tricks my eye into believing there are only two floors. On the inside the effect is just as powerful, but in the opposite way. The rounded areas in both the front room on the first floor and the master bedroom above add space to the interior, making it feel larger and more open. 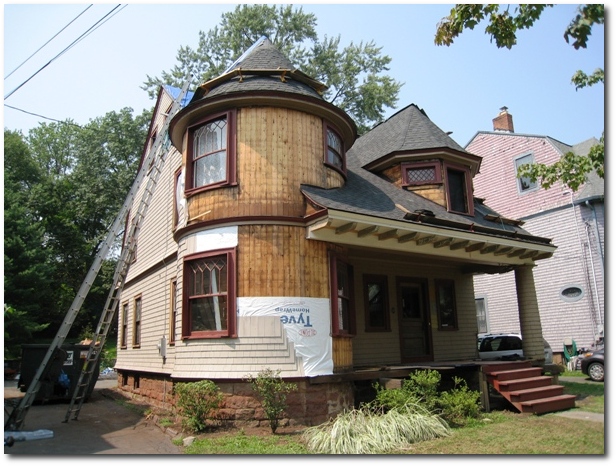 One aspect of the renovation was to replace the exterior wooden shingles. Part of that process involved completely stripping and re-shingling the turret. It was interesting to see that the underlying structure is very similar to a barrel. In the picture, the vertical supports to which the shingles are ultimately attached are visible. They are tightly spaced, and installed in exactly the same way as the horizontal supports are underneath the shingles on the rest of the house. The round column supporting the porch roof is built using the same technique. However, in that one there are spaces between the vertical supports because the diameter is so small.

Christian Winkley, and his Oxford Builders team, have made an amazing amount of progress since renovations began. In the three-week-old photo above, most of the shingling is done and the roof is mostly complete. Since then they have just about finished the outside work and are turning their attention to the interior. The West End Home is going to once again be a beautiful building, and for someone, it’s going to be a wonderful home.

Continue on to the next installment, 79 Girard Avenue – Hartford’s West End.

One thought on “Saving a West End Home: Project Round-Up”