This week we’re focusing on a single development proposal that has divided the residents of Hartford’s West End neighborhood. The Capitol Regional Education Council (CREC) is interested in building a school near the intersection of Asylum Avenue and Elizabeth Street. We’ll start with an overview today and do a site visit tomorrow. From there we’ll look at the arguments for and against the proposal. Finally, we’ll share our thoughts, analysis and conclusions after the inordinate amount of time we have spent thinking about and debating the issue.

A major redevelopment proposal for the West End is in advanced discussion. The Capital Region Education Council (CREC) is interested in purchasing the former Hartford College for Women (HCW) campus at Asylum Avenue and Elizabeth Street from the University of Hartford. CREC would like to redevelop the site for their Museum Academy Magnet School. 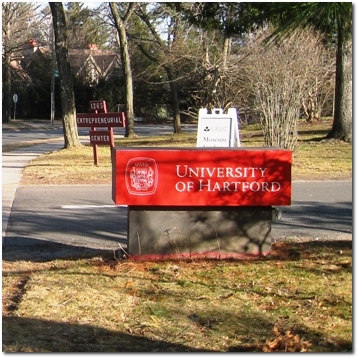 The West End Civic Association (WECA) formed a sub-committee after the initial meeting with CREC, and has been reviewing their plans for months. CREC will give a public presentation of the current plans at the WECA General Meeting on Tuesday, March 13th, at 7:00pm at the United Methodist Church on the corner of South Whitney and Farmington.

The site of the proposed development occupies the majority of the land in the block bounded by Asylum Avenue, Elizabeth Street, and Girard Avenue. According to the Hartford City Assessor’s Database, it is currently comprised of three parcels that total 10.44 acres.

Before being turned into a college in 1958, the HCW site was private residences and made up of large brick homes. HCW adapted them for its educational mission and added newer structures to complete their campus.

In 1991, the HCW merged with the University of Hartford (UHart). The HCW campus maintained its single-sex status until UHart transitioned all of its degree programs into the main College of Arts and Sciences in 2003.

Since then, the campus has been used by UHart for various purposes, though not to its full potential. One of the original buildings was sold as a private residence in 2007, leaving the property that is under discussion today. UHart has leased space in different buildings to other schools over the years. CREC’s Museum Academy has been leasing space on the site since 2008, and currently serves 270 children in Pre-K through Grade 3. 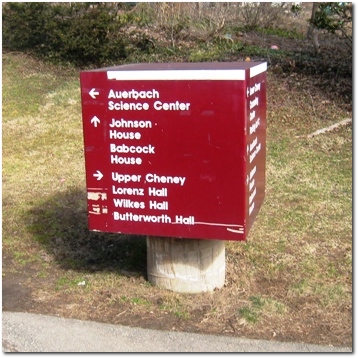 CREC has negotiated the right to buy the former HCW campus from UHart in hopes of redeveloping the site into a permanent home for the Museum Academy Magnet School. They have secured funding to construct a new campus, and have identified the site in the West End as their first choice. When complete, the school will be designed for approximately 430 children through Grade 5, and will include a mix of students from the City of Hartford and the surrounding towns. They are currently studying their options, and have reached out to both WECA and the City of Hartford to determine if their plan is feasible and desirable.

CREC first approached WECA in the spring of 2009 with a proposal that included both a high school and an elementary school. Last summer, they met with the neighborhood again to present the current plan, featuring only an elementary school. Feedback from that meeting, and ongoing discussions with the City and a WECA sub-committee formed to be the neighborhood’s point of contact, resulted in an updated proposal that was presented on February 21st, 2012.

CREC has agreed to extend “neighborhood preference” to the entire West End, rather than the traditional 0.5 mile radius, and is willing to allow the West End community to use their facilities for community events when not needed for school functions. If the current plan were to go forward, CREC would hope to have the facility operational in time for classes to begin in the fall of 2014.

Public meetings about development proposals in the West End tend to attract both the most passionate supporters and opponents of any project, which makes it difficult to know how the overall neighborhood feels on any particular matter.

Supporters of the CREC plan feel that the neighborhood needs additional school choices. The Noah Webster school is the only other school in the neighborhood proper, and does not have enough seats for all of the West End children. Forcing the CREC Museum Academy to relocate out of the neighborhood will take existing seats away, leaving West End students with even fewer local choices.

Additionally, supporters feel that CREC will be a good neighbor and a good steward for the property. Their numerous other projects have been well received, and the organization is held in high regard. They argue that of all the potential uses (or non-uses) for the property, the current proposal is strong. It is a logical use for the space, restores the historic buildings, provides important benefits to the neighborhood, and can move quickly to minimize construction inconveniences.

Opponents of the proposal are concerned about quality of life issues for both adjacent homeowners and the immediate vicinity. They say that school-related traffic will exacerbate an already bad traffic situation during morning and evening rush hours, and will interfere with the quiet enjoyment of their property. They also say that the school could hurt property values.

A second concern is that it’s not clear how much the plan will do to restore and protect the architecturally significant buildings on the site. CREC agrees that preservation is important, but at the same time they will have to modify the interiors to allow the structures to achieve their mission and comply with safety and access regulations.

Finally, opponents note that selling the site to CREC would continue its use by a non-profit. They would prefer the property be returned to private ownership and contribute to the City’s tax base.

If you would like to learn more, or if you have an opinion about whether or not a school should be built on Asylum Avenue, then please join us at the March 13th WECA General Meeting. It will be your opportunity to listen to CREC’s proposal, ask questions, and to voice either your support or concerns for the plans. The meeting will be held at 7:00pm in the basement of the United Methodist Church on the corner of South Whitney Street and Farmington Avenue.

Continue on to take a photo tour of the site.

2 thoughts on “A School in the West End: Overview”