Ellen heads downtown to check out the scene in Hartford’s Bushnell Park.

Ellen and I hadn’t been to a playground in a while, so we took a play break in Bushnell Park while running some errands in Downtown Hartford. Nothing like a slide to make us forget the agony of a trip to the bank! 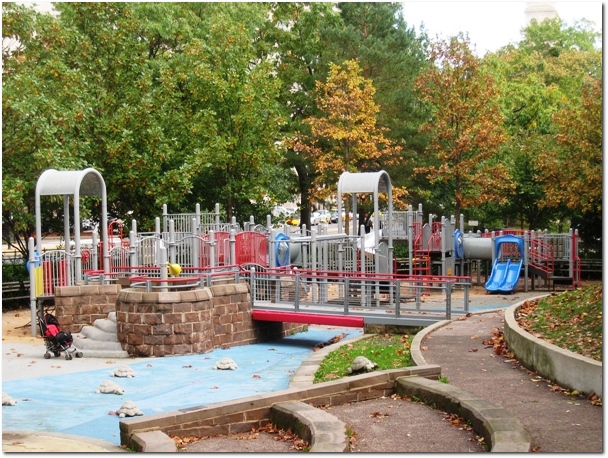 Overall Rating: 4 out of 5 slides

Location: 65 Jewell Street, Hartford, entrance is near the intersection of Jewell and Ann.

Hours: Didn’t see any posted, so let’s go with Dawn to Dusk.

The playground at Bushnell Park is an oasis of kid fun in the grown-up environment of Downtown Hartford. Don’t miss the Carousel next door, and the swings at the eastern end of the park.

Playscape: There are two playscapes, both of comparable size. One has a surprising number of dead end paths, so it seems like it was designed more for exploring and climbing than anything else. The other has more slides and other features, and looks to be on a similar scale to the age 3+ playscapes at other parks.

Swings: There are not any swings near the playscape, but there is a swing area in Bushnell Park near the Pump House. If you’re in the park, just keep walking towards the super-tall apartment building (Bushnell Towers condos) and you’ll find the swings near its base.

Other Stuff: There are small tables and benches with a book theme, and a three row amphitheater. A very small “river bed” runs along the edge of the play area, but I have never seen it running. In theory it is an opportunity to splash and play in the summer. Expanding out beyond the playground, there are large open fields to run around and play in. There is also a pond with fountains and fish to admire. And of course, there is the Bushnell Park Carousel.

Facilities: I don’t think there are permanent bathroom facilities in the park. However, armies of port-a-potties invade the park when there are big events, so facilities are periodically available.

Social Opportunities: Medium. The playscape is not a super-busy area of the park, but Ellen and I have often found people to talk with during our visits. We are rarely the only people there even though we tend to visit at off-peak playground hours (mornings).

Potential for Escape: Medium/High. The playground is well fenced on the road side, with hedges and benches in addition to the fence. It seems to me that it would be a low risk of a kid wandering into the street. However, it is relatively open on the park side, with just a 3 foot retaining wall controlling the flow of kid traffic. I could imagine a kid getting out of sight surprisingly quickly if they took off towards the park and their parent wasn’t paying attention. 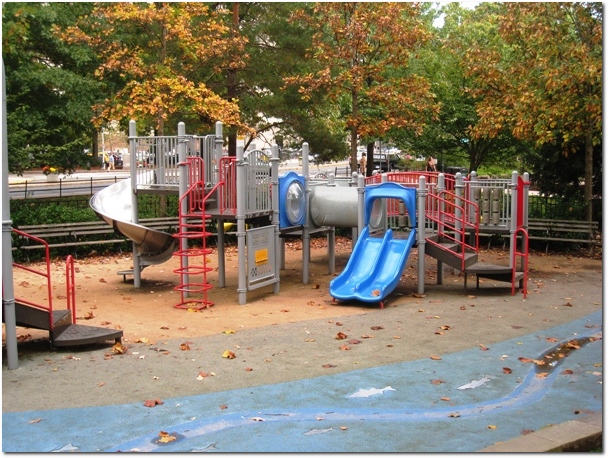 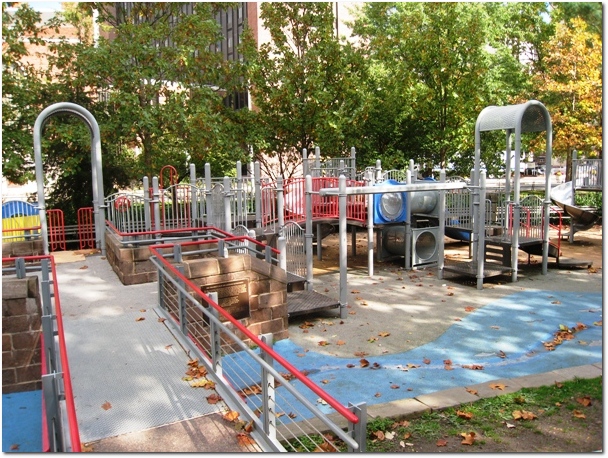