Last night CREC presented their proposal to the public at the West End Civic Association general meeting. The event was standing room only, with well over 50 residents in attendance, and it was a lively affair. Among the attendees were the Mayor, three City Council members, and the Superintendent of Hartford Public Schools. 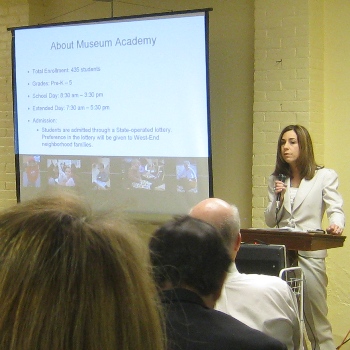 After some initial West End announcements, CREC gave their presentation covering the school, the site, and reasons why they felt it was a good addition to the neighborhood. It was led by members of CREC, their architecture firm, and a gentleman who is a traffic engineer, though I did not catch his affiliation. Their presentation did not change in any meaningful way from their most recent meeting with the WECA sub-committee, so there is no new information to report or analyze.

Audience members then had the opportunity to ask the CREC representatives questions. That was the main reason most attended, and many decided to stand and speak. The discussion was respectful and courteous, and was skillfully managed by WECA President David Barrett.

Both supporters of the CREC proposal and opponents were well represented in the audience. There also seemed to be a meaningful number of undecided residents who came to the meeting to learn more. Based on relative applause levels, it seemed as though there was more support for the project than opposition.

The main issues that the supporters focused on were:
1. The need for additional elementary school seats.
2. The strength CREC’s Museum Academy program.
3. The ability of quality schools to increase home values.

The main issues that the opponents focused on were:
1. The traffic issues along Asylum Avenue and side streets.
2. The precedent of changing from an R-8 zone to allow the school.
3. The negative impact of a school facility on home values.

There was a very diverse set of questions and concerns raised during the 2 hours discussion, too many to list individually. They covered issues like the natural environment of the site, the role of the Noah Webster school in the neighborhood, the diversity of the neighborhood, whether CREC had evaluated alternative sites, the risk of expanding into middle school, and property taxes. 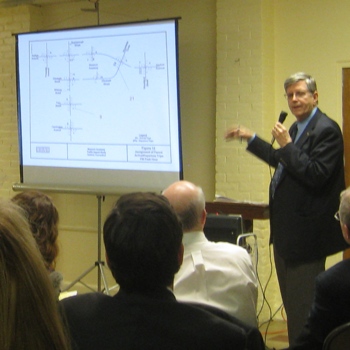 The public comment portion began with a resident, and attorney, announcing that a large number of residents in the northern portion of the West End had retained his services to represent their interests. It’s not clear how many people he represents, or how they are likely to proceed, though they are clearly opposed to the school.

The opposition added a new argument to their position, the concern about setting a bad precedent. The neighborhood has heard numerous proposals over the recent past that would have required a similar zoning change. One of the most contentious was a request from the Jumoke Academy to build a high school at the former Medical Society Museum site on the corner of Scarborough and Albany. The neighborhood strongly, and unanimously, opposed this use for the site, but Jumoke bought the property anyway. There has not been any development to date. Essentially, the argument is that the residents in that area are very opposed to the Jumoke project, and to others that have been proposed over the years for large single-family houses. Therefore, they have to oppose CREC in order to preserve the sanctity of the R-8 zone by not allowing any school to be built in it.

The chair of the WECA Education committee noted that there are about 1,000 school-age West End residents in the Pre-K3 through Grade 8 range, and that the Noah Webster School only has seats for about 250 of them. Adding an additional 200 seats split between the CREC Museum Academy magnet school and the CREC University of Hartford magnet school is very important to serving the neighborhood and will not create excess supply.

The conversation about property values was largely set aside, with the observation from moderator David Barrett that he has heard different things from different real estate agents.

Discussion of the CREC Magnet School is still in the beginning stages. The West End Civic Association, acting as the Neighborhood Revitalization Zone (NRZ) will next decide if they will support or oppose the zoning change CREC requires. From there, the conversation will proceed to the City level, where the Planning & Zoning committee will review the matter. There is also the possibility that actions taken outside the official channels could influence the proceedings and outcome. It will be an interesting couple of months for the neighborhood.

5 thoughts on “A School in the West End: Community Meeting”