There were 464 Hartford County single-family properties that went under contract during the month of October. Activity was closer to last year’s activity level than the 2009 level, which was influenced by a homebuyer tax credit deadline (Recall that buyers had to close by the end of November 2009, which meant getting their property under contract in October). 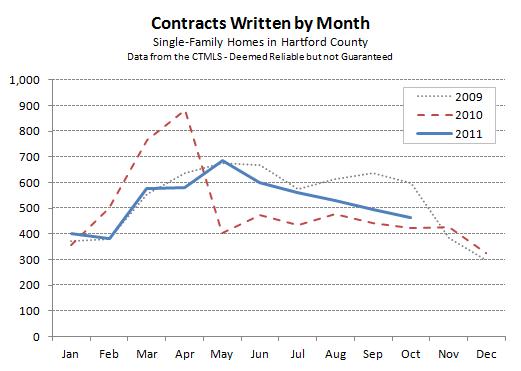 The County remains on track to exceed 2010’s total number of contracts. We need to have 635 homes go under contract in the last two months in order to match 2010, which is a reasonable number despite December traditionally being the slowest month of the year for contracts. 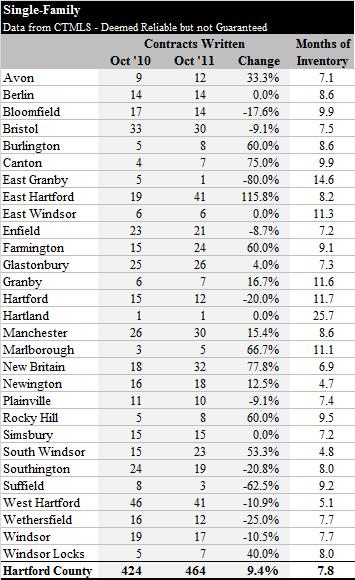 Fallout from the late-October winter storm, and the widespread power outages that came with it, definitely impacted the local real estate markets. Essentially, we had a week off as there were very few showings. That’s not to say we, or real estate agents overall, weren’t busy. As homeowners we had some cleanup to do on our property. And we spent a fair amount of time working with our sellers who had some work to do at their homes.

Once the weekend arrived we began to see signs of life. One West Hartford agent called asking to see a listing even though the home did not have power. He still did not have power at his home, and his buyer client did not have power either, but they were both ready to get back out there and look at homes again – flashlights in hand.

The market could go in one of two ways from here. Hopefully it will pick up where it left off before the storm and continue into late November, as often happens. The alternative is that buyers could just pack it in for the year and turn their attention to the holidays. This week should give us a good sense of buyer sentiment, and how likely we will be to beat 2010’s contract total.